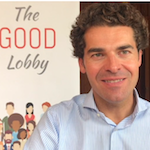 ‘We want to enable citizens to speak to power’

The Italian academic explains how the “citizen lobbying” tools he promotes can help Europeans and NGOs to influence the EU and governments’ decisions on issues that matter to them.

With his concept of “good lobbying”, Alberto Alemanno is a lawyer and academic (and former +Europa party candidate in the Italian general election) who aims to promote the “self empowerment” of citizens and NGOs. This empowerment takes the form of citizens equipping themselves with the tools for asserting their rights and interests and exerting influence in the same - usually successful - manner as multinationals, lobbies and those in power.

The “active citizens” that Alemanno promotes in his seminars and with his book, Lobbying For Change - Find Your Voice To Create A Better Society, go beyond “likes”, “shares”, online petitions and even protests: confronting the problems that our societies face, they form collectives as lobbyists who can influence the political process.

This doesn’t mean substituting citizens’ common sense for politics, as the populist movements would have it, but rather to act as a guide for policy, orienting it in a direction more favorable towards citizens and collective interests, great and small. The citizen lobbyist promoted by Alemanno is usually a professional who - with time and energy - puts his or her talent and knowledge to the service of the community. This non-profit activity might be considered the kind of luxury that only active and knowledgeable (and relatively affluent) citizens can afford, but its benefits reach the whole society.