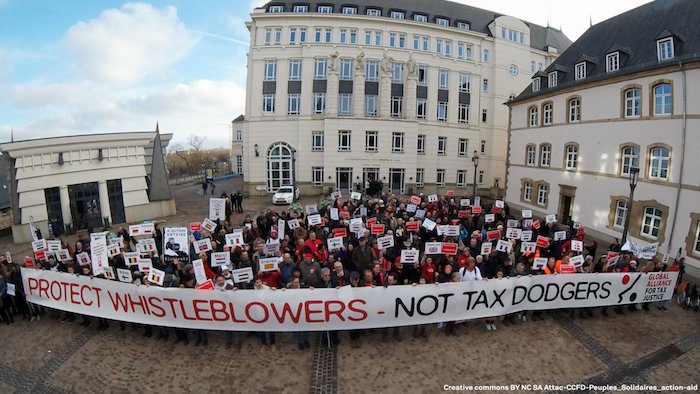 They put in danger their private and professional lives to reveal the embezzlement and irregularities they discover in their workplaces, yet whistleblowers do not enjoy the protection they deserve. But now things in Europe are starting to shift.

On 15 March, a Luxembourg court of appeals condemned Antoine Deltour and Raphaël Halet to a suspended sentence of six months and a €1,500 fine, and a nine-month suspended sentence and a €1,000 fine respectively, for violating the Grand Duchy’s law on business secrets. The pair had stolen thousands of confidential tax documents from the auditor PricewaterhouseCoopers on agreements that it made with the Luxembourg tax authorities on behalf of several large multinational companies. Deltour and Halet had sent the documents to the journalist Edouard Perrin, who then published them as part of the journalistic inquiry carried out by the International Consortium of Investigative Journalists, nicknamed LuxLeaks. Perrin was acquitted of wrongdoing both in the first trial and in the court of appeals.

Just like the more famous Edward Snowden or Chelsea Manning, their case attracted the attention of the general public and of the European institutions regarding the status and punishment of whistleblowers, or informants – people who publically denounce or inform the authorities about illicit activities or irregularities within the organisations to which they belong. “It is often professionals with high-level jobs in a company or a public administration and who, for moral reasons, decide to leak information in the public interest to the press,” explains Ricardo Gutiérrez, secretary general of the European Federation of Journalists. “We think they have a fundamental role for democracy and transparency,” he adds: “these people suffer because of what they have done. I don’t know anyone who came out of the process better off financially than before they blew the whistle. They suffer enormous pressures, also from a financial point of view. They take a risk in the collective interest and face the consequences of that risk with no safety net.

The LuxLeaks affair has also shown “the absence of judicial protection for whistleblowers at a national and EU level”, as 108 MEPs described it in an open letter in which they express their “support” and “solidarity” for Deltour and Halet. According to the European institutions, this absence is justified by the lack of a legal basis in EU treaties.

In reality, the Charter of Fundamental Rights of the European Union, which all EU Member States must respect, establishes, in article 11, that “everyone has the right to freedom of expression” and that this right “shall include freedom to hold opinions and to receive and impart information and ideas without interference by public authority and regardless of national borders.” Guaranteeing the right to information, the Charter also protects the sources of this information – whistleblowers, in this case – and those who verify and distribute it – journalists. “It is the perfect pairing,” says Ricardo Gutiérrez, “because journalists play the role of intermediaries, verifying the information that whistleblowers provide and making sure that their motivations are driven by ethical concerns and not by personal interests.”

“The presumed absence of legal guidelines is the reason the European institutions normally give when there is no political will to tackle a particular issue,” observes Pamela Bartlett Quintanilla, who follows the topic for the Greens in the European Parliament. Together with the Liberals, the Greens are among the most active parties when it comes to defending public freedoms. “In reality, the legal framework is there, and it is founded on the need to protect the internal market from distortion and to protect working conditions for whistleblowers against possible retaliation from their employers,” she adds.

The European Parliament’s Budgetary Control Committee has worked on the first option, which it presented in its report (rapporteur Denis De Dong, GUE/NGL) “on the role of whistleblowers in the protection of the EU’s financial interests.” It is a report in which, moreover, the Committee “affirms that whistleblowers have an essential role in helping Member States, the institutions and the organs of the EU to warn and oppose any violations to the principle of integrity and the abuse of power,” and “calls on the Commission to present a legislative proposal immediately that would establish an effective European and global programme to protect whistleblowers.”

Elsewhere, the Commission on Judicial Affairs is working on a more far-reaching report on whistleblower protection in the European Union, for which Virginie Rozière (S&D group) will be the rapporteur and which should be approved in committee on 28 September. The Committee on Economic and Monetary Affairs has already produced a draft with its opinion, as has the Committee on the Environment, Public Health and Food Safety.

Protecting whistleblowers is also considered in the recent European directive on trade secrets, even if it is aligned with the legislation of the most restrictive Member States – as a number of journalist organisations have pointed out. It puts forward two exceptions to the trade secrecy: “the exercise of one’s freedom of expression and of information” set out in the Charter of Fundamental Rights, and the fact of “exposing an error, inappropriate behaviour or illegal activity,” on the condition that the whistleblowers “have acted with the aim of protecting the public interest.” “During the negotiations to develop the directive, we called for the protection of people revealing information in the public interest to be inserted in the text, but the Commission refused,” Gutierrez recalls; “for this reason we created, along with 48 trade unions and civil society organisations, a platform to tell the Commission to adopt a specific directive on the protection of whistleblowers.”

“A directive – which would fix the minimum standard of protections to which Member States should conform, while leaving them free to set the bar higher – would be a better measure than a regulation, which is more complex and difficult to approve,” argues Pamela Bartlett Quintanilla. That is why the Greens in the European Parliament presented in March 2016 a draft directive that could serve as a basis for discussing with other groups in the parliament and with the European institutions. The proposal was warmly received by the president of the European Commission, Jean-Claude Juncker, by vice-president Frans Timmermans and by the justice commissioner Věra Jourová. She also launched in the beginning of March a public consultation on the protection of whistleblowers, which closed on 29 March, to gather feedback from interested parties on the type of protection that exists in each Member State, their weak points and their strengths that could be carried over to a national and European level. The Commission has also made a commitment to produce a text – without specifying what kind – by the end of the year.

Meanwhile, in February the Parliament approved a resolution with a large majority in which it asked the Commission to propose “an effective and wide-ranging programme for protecting whistleblowers” and “the creation of an independent organisation linked to the EU, with offices in Member States, to help whistleblowers within public institutions and beyond to reveal potential irregularities” in the use of European funds.
Adopting a directive seems all the more urgent, Gutierrez observes, since “many Member States – the UK, France, Poland or Germany – have recently adopted measures, in particular regarding surveillance of communications, that limit protection for journalists’ sources, such as whistleblowers, or which have the effect of dissuading potential whistleblowers from turning to journalists. And the problem is that citizens do not seem to be up in arms about this and are resigned to seeing their freedoms limited, starting with the right to information. The problem is that once you abandon a law, it is extremely difficult to return to it.”

Categories
EUPolitics and democracySocietyThe media and freedom of information