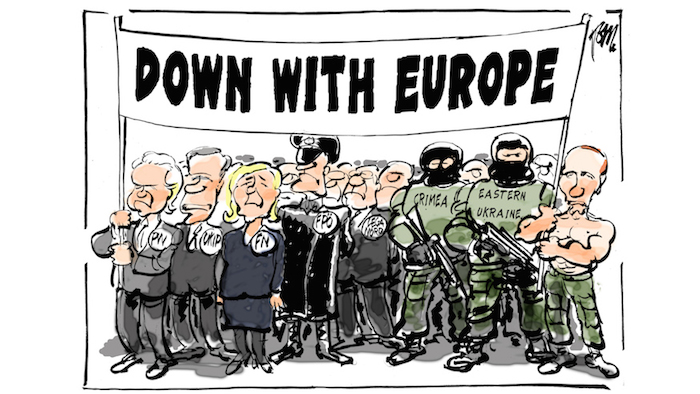 Why do European conservatives love the Russian president?

“Russian tales always conquered the hearts of the Germans,” writes Berthold Kohler, publisher of the Frankfurter Allgemeine Zeitung, in a piece titled “The strong Vladimir”.

The Russian president, he writes, has first gained the support of the Russian people by “showing them that he has the power” to “correct a world that has been thrown into imbalance”. The people, he writes, hope “that the world might become as in their dreams” —

The horse-riding, hunting, swimming President – who is seen in wild nature with a bare chest – created security and order after the chaos and the demise of the Yeltsin era. […] The price he asked was submission to his regime of “guided democracy.” The Russian people paid because Putin also made sure – or at least allowed – that oil and gas wealth reached larger parts of society.

By annexing Crimea, Putin also addressed the “phantom limb pain” that “plagues Russia” since the loss of the “colonial empire at its doorstep”. [[Putin, Kohler writes, gave Russia the impression it was “waking up from years of weakness”]].

Kohler gives three reasons for “sympathy” for those feelings in the West: a sense of guilt toward a “poor, raided, humiliated and betrayed Russia” because of everything from the Second World War to the expansion of NATO, a feeling particularly strong in Germany; anti-American sentiment, “looking for a counter-power” against the “Americanisation of the World”; and a search for an “alternative to ‘decadent’ and ‘disoriented’ Western society” —

[This search] is accompanied by a desire for strong political and spiritual leadership – a desire also repeatedly expressed in Germany (especially by industry leaders) – but of course within the existing democratic structures.

Kohler stresses that the far right “not only admires but worships” Putin, despite the intervention in Ukraine. Kohler observes that Marine Le Pen, leader of the National Front party in France, has called Putin “the last defender of Christianity in Europe”, adding that Putin’s “antifascist” discourse does not discourage Le Pen from praising the Russian president – “not least because Russian money bails out the National Front”.

[Putin’s] affirmation of the “old values” also impresses lost conservatives who see (or want to see) in him the last crusader against the aberrations of modern society: gay marriage, gender mainstreaming, Conchita Wurst. […] It is astonishing how less some conservatives care that, on his crusade with ironclad feet, Putin also tramples over values and principles akin to their conservative ideas: freedom, self-determination and the rule of law.