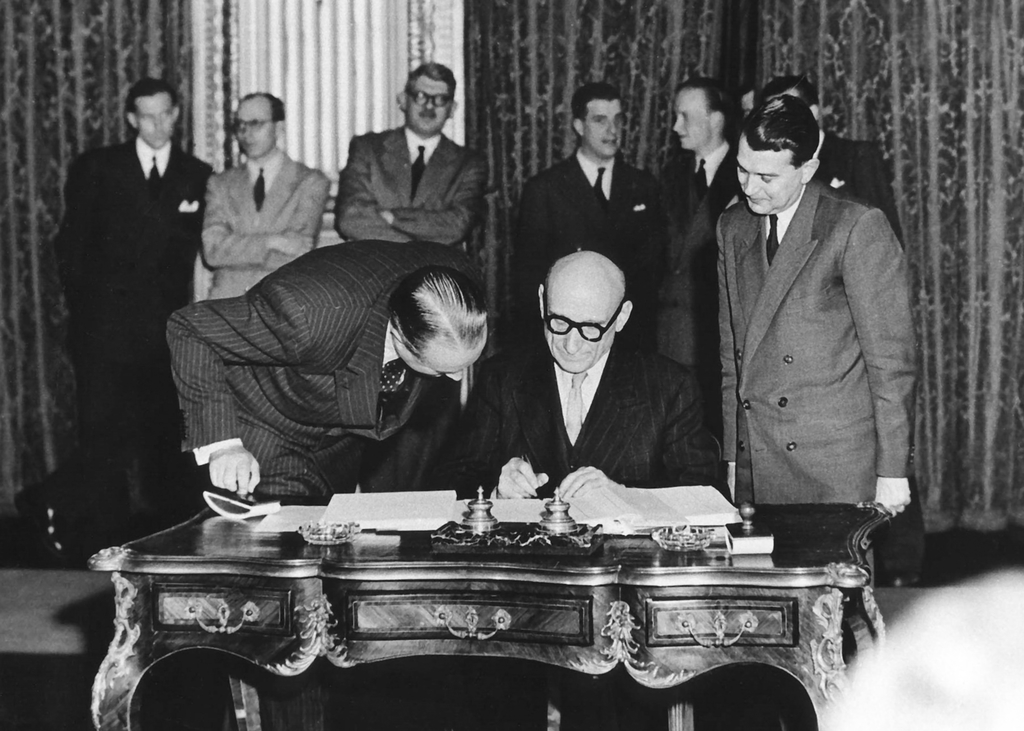 71 years after the Schuman Declaration, what are Europe’s successes?

In the 5th episode of The European Pavilion Podcast, Lore Gablier hosts Silvia Bencivelli, an Italian science journalist, Carolyn Christov-Bakargiev, an Italian-American historian and curator, and Tobias Holle, a German climate activist. They discuss to what extent the European project has succeeded or failed. A podcast by the European Cultural Foundation.

The Schuman Declaration: where the EU was born

The 9th of May remains an important date for the European Union: it’s Europe Day, the yearly celebration of Robert Schuman’s declaration for the ECSC (European Coal and Steel Community). Each year, the 9th of May is the occasion to celebrate European identity and consider the extent of its relevance, its failures and its successes.

In the podcast, each guest begins by highlighting the positive aspects and successes of the European Union. They mention the enhanced mobility, the long-lasting peace, and the international ties between EU citizens.

“The European Union, as a peace project, works surprisingly good, actually”, says Tobias Holle. Robert Schuman’s main aim was to hold European countries together through an economic and commercial bond – especially after World War Two. For the climate activist, it’s a wrap.

Silvia Bencivelli points out the fact that “the success of this project is maybe that we are talking together. Me, I'm in Rome and you are, I think, in the Netherlands, but you’re French.” She continues: “After 1992, after Maastricht, we started to travel, to study in other countries, […] to learn other languages''. This opinion is shared by European citizens, for whom travelling from one European country to another is just a matter of hopping on a train or plane and having their national ID card in their pocket. According to a recent poll led by eupinions in December 2020, the most relevant benefit of the European Union is the opportunity to travel, closely followed by peace and external security:

The third guest of the podcast episode, Carolyn Christov-Bakargiev, adds a very personal thought. She tends to consider the European project an accomplishment because of the ability of European to look at their historical mistakes and to atone for them. Recalling the Nazi regime, for instance, or even colonialism, she argues: “I think that one of the successes of Europe is the ability to self-criticize and to see what one does that is not positive”.

The third guest of the podcast episode, Carolyn Christov-Bakargiev, adds a very personal thought. She tends to consider the European project an accomplishment because of the ability of European to look at their historical mistakes and to atone for them. Recalling the Nazi regime, for instance, or even colonialism, she argues: “I think that one of the successes of Europe is the ability to self-criticize and to see what one does that is not positive”.

Nuances: a matter of oldness and rapidity to adapt

In the light of the successes of the European project, one should also underline the more complicated aspects in the establishment of the Union. Guests emphasize diverse aspects which slow down the EU's efficiency.

“The first target to unite Europe, also the East Bloc and the West Bloc, was a success, but then the expectations and the needs of the people of the European Union  changed. And this is something many institutions are kind of realizing now, but they did it too late”. The guest puts in light a feeling that the European Union did not seize the opportunity to adapt and modernise at the same pace as the one with which our generations are now evolving.

“I think people in Europe have been perceiving Europe as a bureaucracy machine for a long time now. […] There is urgent work to be done”. This view is particularly shared by Tobias Holle, who argues that the issues facing the European Union are related to its adaptation and, ironically, its inability to bridge its disunion: “We have to come closer”. In this respect, his suggestion to bring the 27 countries to a greater closeness would be to set common goals. For example, “beating the climate crisis or going over the democratic crisis in some countries”.

This is the aim of Fridays for Future, the movement that Tobias Holle is part of. It’s a movement that started in august 2018, when young Greta Thunberg began a strike in Sweden to raise awareness on climate change.

The movement spread throughout  all continents and was joined by more than 14 millions people. Their actions are on the ground – they organise "Global Climate Action Days" as well as demonstrations and strikes around the world –,  but also in the political corridors, with some petitions like the ECI, European Citizen Initiative. This is the most direct democratic way to have an impact on European policies, and Fridays for Future has launched one to demand the European Commission to take actions following the Paris Agreements. Fridays for Future estimate that the rule of the agreements to maintain the global warmth growth under 1,5°C is not dedicated enough means or attention.

In order for their request to be taken into consideration in the European Commission’s agenda, they need at least a million firms before 23rd of June 2021. On June 1st, they had 91 165.

Carolyn Christov-Bakargiev explains that EU’s lack of rapidity in following modern evolutions is related to the thin frontier our contemporaries have faced through the shift from the analogue to the digital, and then the development of digital itself.

Is it true that we have to face increasingly fast-paced changes, not only of our means of communication, but also in our generations? It seems that what was supposed to be a generation a few years ago was defined by the age difference between parents and children. Today, we are faced with a similar rhythm to the one Apple follows with the release of its new product: almost every year brings its new commitments, lenses, sights, thoughts.