Opinion Migrants at the Belarus-Poland border 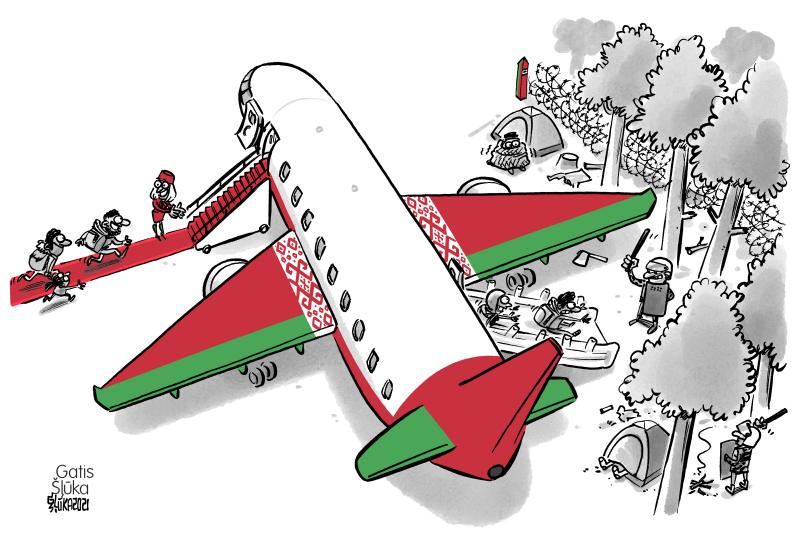 Opinion Migrants at the Belarus-Poland border

"Invited" by the Belarusian regime with the promise of entering the EU, thousands of migrants from the Middle East are being driven to the border with Poland, where they are being turned back. From Minsk, journalist Evgeny Kazartsev explains that this crisis is a propaganda operation by President Alexander Lukashenko to blame Western countries.

“I’m certainly no racist, but...” – wrote a Twitter user, receiving a slew of replies, from "but Muslims should not be let in" to condemnation for the rhetorical construction.

Since May, when the migration crisis at the Belarus-EU borders began, the social networks have been relatively silent on the subject. The dam burst on the day that thousands of migrants gathered and marched in convoy to the Polish border.

More : Children of the Belarus dictatorship

Previously, photos of "tourists", videos of Arab dancing in the streets, and jokes about Belarusian curiosities, could be seen on Instagram and Tiktok. Now hundreds of users are engaged in not so much a discussion as another great shouting match about how to treat migrants from Iran, Iraq, Syria, and other countries.

Let's imagine that, when thousands of Belarusians went to Poland after August 2020, Poles had said en masse: "Why are you coming here? Go back to your country!” But Poles did not allow themselves to say that.

There's a counterargument that Belarusians received this treatment because life is hard there. And here I will argue again: do Kurds flee their country because life there is good? Who on Earth leaves their country when life is good there?

Who is to blame for this humanitarian catastrophe and how is it being exploited?

Another counter-argument: they are safe now, nothing threatens them in Belarus, so let them stay there! Instead, migrants want to go to Germany, where they have better benefits and more possibilities to live normally, and this turns them into "economic" refugees rather than "political" ones. That is true, but it does not contradict the fact that they are in danger in their homeland and simply want a decent life. A decent life is not a perk, it is a basic right of any human being. Many Belarusians, fleeing from the Belarusian security forces, also tend not to stay, for example, in Ukraine. Instead they go to Germany or the Czech Republic. Can we blame them for that?

When we talk about thousands of migrants stranded in Belarus and at the border, we often forget that these are people who are having to sleep in the woods on cold November nights. Who are alternately beaten by Belarusian and European border guards.

Who have borrowed and sold their belongings to get the money for their journey. How can you consider a person who flees war, poverty or genocide - and for the sake of this is willing to break the law, to pass up basic conveniences and to lead children through frost-covered forests, knowing that everything may end up in death - a "freeloader who has nothing to do with us"? Here I’m questioning the morality and intelligence of such armchair experts.

But another thing is important. Obscurantist (there is no other way to say it) arguments about whether migrants (sorry, the privileged) deserve security and a better life distract from the main issue: Who is to blame for this humanitarian catastrophe and how is it being exploited?

Russian state propaganda is doing its best to divert attention from the causes of the crisis. They say that the "collective West" is to blame for the "migrant crisis": they say that without the bombing of Baghdad none of this would have happened.

And the current situation on the EU-Belarus border is blamed on heartless European border guards. Which sounds strange, given that migrants have remained in the territory of Belarus.

By shifting the focus, people are helping state propaganda.

There are questions that propaganda does not touch. Why did the number of “tourists” suddenly increase after [president Aleksandr] …