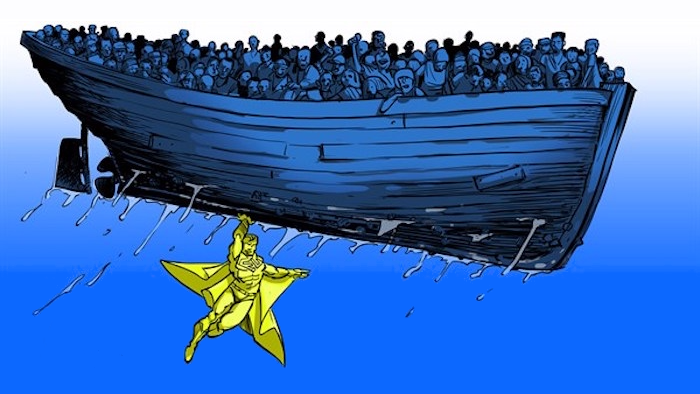 A European Marshall Plan to take in asylum seekers

Instead of aiming for a partial and shaky agreement to redistribute refugees between unwilling members states, the EU should launch a programme similar in scale to the American’s Marshall Plan for Europe after the Second World War.

In an article that appeared in French newspapers, Guillaume Duval, the editor in chief of Alternatives économiques, and MEPs Pervenche Bérès and Yannick Jadot suggest paths the EU could take to ensure a humane welcome to the tens of thousands of refugees arriving at its borders.

While the financial crisis is now receding, following the introduction of the European Stability Mechanism (ESM) and the fading threat of “Grexit”, “the massive influx of refugees, coming particularly from Syria, has fanned the flames of Europe’s crisis,” the trio writes. It is an influx that has “especially weakened Greece and Italy, two of the countries at the centre of the eurozone crisis.” And so “this new challenge has further entrenched the hostility between these countries and EU institutions, with the threat of excluding Greece from the Schengen zone.”

As if this were not enough —

the rift between central and eastern Europe has deepened, while adding fuel to the fire for Brits tempted by Brexit. Finally, this crisis has considerably weakened Angela Merkel’s position domestically. She now finds herself alone in Europe because of her open stance towards refugees. [...] What’s more, when it comes to refugees, Angela Merkel has taken on the honorable mantle for Europe. So it is vitally important to stop other leaders from seeing her misadventures as a sign that only cynicism and demagogy are rewarded.

In this context, the trio ask how “we can find a win-win solution”. They remind us that “in the first instance, this question is absolutely about economics.” Indeed it would be “intolerable” to bring up “an aging Europe’s need for labour” just as the advantages of Europe welcoming more asylum seekers would be felt by the elite from these war-torn countries rather than the very poorest.

“If there is an absolute imperative to lower the drawbridge of ‘fortress Europe’,” Bérès, Duval and Jadot write, “it is primarily for humanitarian reasons” —

because these people would be risking their lives to stay in their country and because we can no longer leave the burden of care exclusively on the shoulders of neighbouring countries like Lebanon, Turkey or Jordan, who are now also at risk of destabilising. After the Second World War, and again after the Algerian War of Independence, Europe and France dealt with migratory movements on a vastly bigger scale. Why were they not more of a burden? Essentially because taking in refugees was financed on credit.

Believing that the solutions proposed by the EU are only “setting up conflicts”, they instead suggest learning from the Marshall Plan, which “allowed, particularly in Germany, the resettlement of millions of refugees fleeing from the east” —

if we finance refugee resettlement on credit, funds allocated to the rest of the population will remain untouched, while the amount of global economic activity will proportionately increase… And these refugees will pose fewer problems the more generous we are with our funding: it is only if we allocate too little money that they risk becoming a social burden by working in the black economy… In due course, thanks to the additional economic activity they will provide once settled (a process that can move very quickly if well managed), there should be no issues about repaying the additional debt.

In a Europe of 510 million citizens, “giving a decent welcome to two million refugees” would cost “something on the order of €30 million per year, or 0.2% of the EU’s GDP” —

how can we consider it impossible to take on this extra debt collectively when at the same time the European Central Bank is pumping an extra €60 billion into the European economy each month?

instead of pushing for a fairer distribution of refugees in Europe, Germany has accepted that the EU should take on debt to help its neighbours welcome them in dignity.