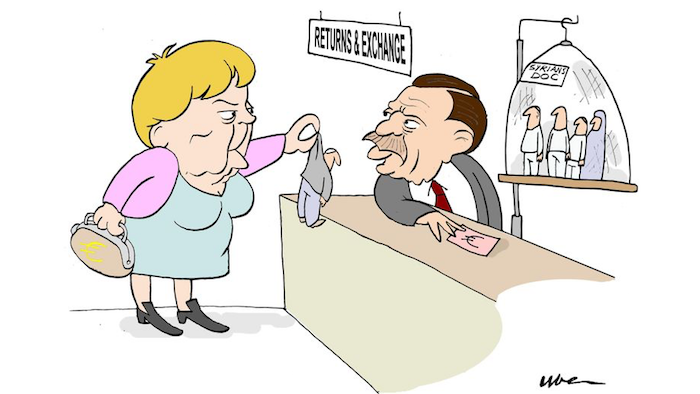 A fool’s game on refugees

At the summit between the EU and Turkey on 7 March, it was agreed that Turkey will take back the refugees that have arrived in Greece through its territory, in exchange for significant financial aid. For Cengiz Aktar, whose newspaper has been shut down by the Ankara government, the EU has abandoned its values in its dealings with aregime without scruples.

It would have almost passed unnoticed if, at the EU-Turkey summit on 7 March, the Turkish Prime Minister had not added to the Europeans’ woes by demanding to have his cake and eat it — the cake being the government take-over of the Zaman press agency on Friday evening, two days before the Brussels “Asylum Summit”.

These strong-arm tactics – perhaps even blackmail – were daring. Ankara seemed to be sending Europe a message: “I have been dictating the terms since last Autumn, you have to bend to them: doubling the €3 billion payment previously agreed on to accept refugees sent back from Greece, restarting negotiations on EU membership, removing the Schengen visa as quickly as possible – in June – for 78 million Turkish nationals. As for human rights issues, that’s none of your business!”

The Europeans put themselves in a very vulnerable position the moment they came to the false conclusion that Turkey would be able to stop the flow of migrants towards western Europe via Bulgaria and Greece. It was during the summer lull. The European Commission, following Berlin’s orders, complied. Its president, Jean-Claude Juncker, declared that refugees were the top priority and everything else, in particular the widespread human rights violations in this future member of the EU, were from now on secondary.

The stakes were high. Ankara rushed to pile on the pressure while the Europeans, with Angela Merkel at the lead, were in a position of need. Turkey put in place a handful of superficial measures to give the impression it was going to stop the trafficking to Europe, but of course it did not manage to stop anything.

The figures are telling. While in 2015 some 885,000 refugees – of all nationalities – travelled across the Aegean to reach Greece, in the first two months of this year, more than 120,000 have managed to slip through the holes in Turkey’s nets. These holes are not meant to exist and these nets should have been in place since the preceding refugee summit on 29 November 2015.

Unfortunately it is impossible to stop people fearing for their lives or feeling threatened in the country where they first sought asylum. That is unless we want to build impassable barriers, like in North Korea. It goes without saying that Syrians are at least better off in Turkey than at home, but they see no future there: apart from its generosity in accepting them, the country has little to offer.

We must recognise that Turkey has no serious experience of handling asylum seekers, having implemented a geographical limitation clause on the 1951 Geneva Convention and therefore depriving itself of the possibility to develop institutions for asylum rights that would be able to deal with massive influx of refugees. It has subsequently developed over the years an “industry” that traffics people along the Turkish coast, estimated to be worth several billion euros. It is said that whole swathes of olive growing regions have been abandoned as farmers exploit this new source of wealth. It is difficult to stop all this overnight, if ever.

And now what? Both sides are happy to believe in miracles while refugees continue to cross the sea. The Europeans have talked themselves into the myth of Turkish efficiency, seriously undermined since 29 November, and have added to the illusion by authorising NATO maritime patrols – though no one seems to know who these are meant to dissuade. On the other hand, Ankara harbours dreams of “a visa-free Europe” as the golden argument for re-electing Recep Tayyip Erdoğan in his quest for absolute power.

What the Europeans have avoided seeing in their desperate search for a solution to the migration crisis is Turkey’s slow descent into fascism since the Gezi protests in May-June 2013. This descent has accelerated with the allegations of corruption against eminent politicians in December 2013.

Since 2013, things have been unravelling; Turkey under Erdoğan has entered a spiral of violence and authoritarianism where every legal violation requires another more serious violation to disguise the one before. These disguises are both metaphorical and material, as the government cracks down on press freedoms. There is effectively no longer room for a free press in this repressive environment and the Zaman group is the latest victim of a dark series of government take-overs of newspapers and television channels. In addition, social media has been systematically suppressed since 2013.

Turkey’s low global rankings say much about the state of the country. For Freedom House, when it comes to press freedoms, Turkey sits in the “unfree” category, while for Internet freedoms, it is in the “partially free” category.

According to Reporters sans Frontières, Turkey ranks 149 out of 180 countries, behind Niger, Liberia, Zambia, Mali and Zimbabwe.

And that is only concerning press freedom. When it comes to fundamental freedoms listed in the European Convention on Human Rights, Turkey fares no better, even just taking account of the internal war in Turkish Kurdistan. In fact, Turkey tops the list of countries charged with individual complaints in the European Court of Human Rights.

In sum, the immoral deal that Europeans, with the Germans at the forefront, hope to seal with Turkey will only have one “positive” aspect: it will bury forever Ankara’s application to join the EU. Its request to restart negotiations with Brussels is pure spin because it satisfies almost none of the membership criteria, particularly when it comes to human rights. By ignoring the abuses committed by Turkey and by continuing bilateral discussions, Europe is treating the country like a non-member rather than a future member of the EU; meanwhile, Turkey has renounced its commitment to democratic values.

On the other hand, the agreement contains surprises which won’t take long to appear: instead of stopping Syrians, even at the price of closing their eyes to the Turkish regime’s human rights abuses, Europeans will soon have to take in Turkish and Kurdish refugees fleeing these abuses…

Categories
Looking at EuropePolitics and democracyTurkey