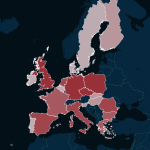 A map of the health consequences of weak EU coal regulation

This map, by Zachary Davies Boren, from the Greenpeace Energy desk, shows how EU countries will likely be affected by premature deaths in the decade after 2020 due to the EU's weak proposed air emission standards.

According to a recent study by environmental economist Mike Holland, the EU’s draft power plant pollution regulations – called BREF – could lead to 71,000 avoidable deaths in 2020-2030 because the currently proposed standards do not require adoption of the latest, most effective techniques. The analysis comes two months after Energydesk revealed that the energy industry was disproportionately represented in the EU technical working group that helped write BREF; more than half of the group’s 352 members were found to have ties to the industry.