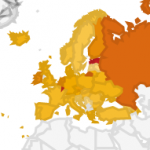 This interactive map, by CAIT, the Climate Data Explorer of the World Resources Institute using various sources (as the International Energy Agency and the FAO), shows the per capita emissions from all greenhouse gases (GHG) and major emission sources for each country in 2012. It includes the estimations of the GHG emissions resulting from direct human-induced land use, land-use change and forestry activities like, for example, cutting down forests. The darker the color, the more GHG were generated.

As discussions at COP21 Climate conference in Paris enter their final days, French diplomats are pushing to reach a final agreement by the 11 December deadline. Currently, "the EU and 79 African, Caribbean and Pacific countries demanding regular reviews to ramp up the ambition of greenhouse gas reduction promises, and the biggest developing countries demanding additional financing pledges and rejecting calculations of how much the rich world has already provided", reports the Guardian. But, it adds, "behind the scenes the French presidency is conducting crucial ministerial talks – with each negotiating bloc in turn and in small groups – with the aim of producing a draft trade-off deal by Wednesday".

You can unsubscribe anytime *
Categories
Environment, climate and sciencePollutionEuropean Union