Corruption in the public sector 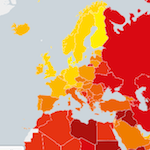 Corruption in the public sector

A map showing Europe’s most and least virtuous countries

Transparency international released its annual Corruption perception index. The index covers perceptions of public sector corruption in 168 countries. According to its ranking, two-thirds of the countries on the index scored below 50, on a scale from 0 (perceived to be highly corrupt) to 100 (perceived to be very clean). 7 out of the 10 “cleanest” are European countries. Denmark took the top spot for the 2nd year running, with Russia and Azerbaijan being the European worst performers.

Top performers share key characteristics: high levels of press freedom; access to budget information so the public knows where money comes from and how it is spent; high levels of integrity among people in power; and judiciaries that don’t differentiate between rich and poor, and that are truly independent from other parts of government.

In addition to conflict and war, poor governance, weak public institutions like police and the judiciary, and a lack of independence in the media characterise the lowest ranked countries.
The big decliners in the past 4 years include Libya, Australia, Brazil, Spain and Turkey. The big improvers include Greece, Senegal and UK.