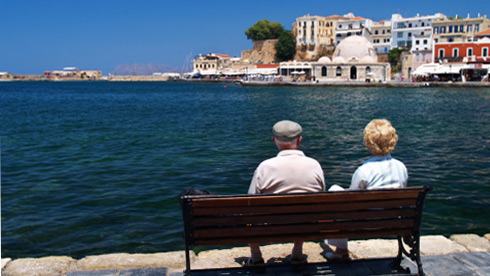 A new life for your old age

Enjoying your retirement under a tropical sun on the other side of the world is no longer the preserve only of western Europe’s wealthy elite. Increasing numbers of Czech pensioners are abandoning their homeland in order to “wipe out the winter."

A quay in Chania, Crete

After intensive cardiac surgery, 80-year-old Oldrich Šubrt decided to seek out a little fun in his retirement and went to live part of the year in a place where he has found his own personal paradise. Here, his biggest concern is accidentally drowning while he splashes about in the warm water of the beautiful Greek bay where he has set up his new home.

He chose Greece because of its large number of people who live to a ripe old age, and he is confident that, living alongside them, some of their secrets will rub off on him too. Having undergone six heart bypasses, he does not worry about medical complications and is not afraid of solitude, either. Divorced for many years, with two sons and eight grandchildren, he says, “The world is a friendly place, and if you really need it, people help out. Besides, a man is alone quite a lot in life even at home.”

With the locals he communicates in a mixture of simple English and German sentences, and despite the language barrier has already managed to make many friends among the Greeks, who look after their family farms around the bay.

Although his monthly pension of 11,000 Czech crowns [€429] is not exactly big money at the European level, for the four years he has lived here at the seaside, he has learned to get by on it without much trouble. He rents a small garden house, which costs €2,000 for his entire four-month stay. His pension, of course, cannot cover that, but Mr. Šubrt has found, he says, “non-standard solutions.” In Prague he left behind an apartment with a high rent and went to live in the countryside with friends, in whose small house he now lives for free, helping out occasionally, for the “Czech part” of his year.

A total of 70,000 Czechs are spending their pensions in foreign countries, with 20,000 of these having joined the exodus in the past five years. The 10 most popular countries for these emigres are neighbouring European countries, home now mainly to Czechs who left home before they retired. Slowly, however, an increasing number of their fellow countrymen are painting over the grim picture of a grey retirement, with the brighter colours of adventure by packing up for the tropics. In rich countries, it’s a well-known and quite ordinary phenomenon. The migrating pensioners are dubbed the “winter nomads” because they lift anchor with the first autumn wind blowing down from the north.

However, in the Czech Republic the winter nomads do not yet amount to a trend; it’s still more of an individual choice. “So long as job mobility in general doesn’t change and it’s still not normal for young people and families to move to where the work is, it won’t strike seniors as normal either,” says Matěj Lejsal, head of the nursing facility for the elderly, Domov Sue Ryder. “Today’s 40-something generation won’t be facing a language barrier and will be more open to the opportunity to live elsewhere in their old age. It’s all a consequence of the isolation of our country when our current seniors were young.”

‘Wiping winter off the calendar’

Inka Frištenský, 62, and husband Peter, 67, are proof that the winter migration is not really mostly about money. Their example shows it is possible to live under palm trees and even put aside some money out of the average Czech pension.

“It’s cooled off slightly, down to just 28 degrees Celcius,” reports Mr Frištenský via Skype from his second home near the town of Galle in Sri Lanka. The couple locked up their Prague apartment last October and will not return until the beginning of April. They’ve been doing that for four years and cannot praise “wiping winter off the calendar” highly enough.

At the start, donning backpacks and avoiding travel agencies, they visited Sri Lanka for a number of years for just a month at a time, and liked it so much they decided to come back. “We live here in the village, which is like any other, but compared to people in the Czech Republic 95 per cent of the people are very friendly, mostly Australians and Germans.” Basic English is enough to get by on.

The Frištenskys and Mr Šubrt have managed to pull off what others consider a dream beyond reach. How did they do it? By being willing to give up the domestic comforts considered normal here. Mr Šubrt left behind his rented Prague apartment, and when they are at home, the Frištenskys do not go out to the cinema, theatre or restaurants. Instead they take trips into the countryside on bicycles instead. “Our interests are quite low-maintenance,” says Mrs Frištensky. “Our peers hold onto cottages and cars. We don’t own anything like that."

“Three million Czechs live in a state of uncertainty because of pensions,” headlines Hospodářské noviny. Everyone aged between 35 and 55 years has three months to decide whether to join an additional second private pension scheme, which launched on January 1, or to rely exclusively on the pay-as-you-go public system. The economic daily explains that -

In order to slightly improve their pension, the new system allows people to divert 3 per cent of their gross income from the state system to a private fund, but they have to pay an additional 2 per cent from their own pocket.

Meanwhile the social-democrat opposition is threatening to nationalise the private scheme – just as the Hungarian and Polish governments did several years ago – after the 2014 general elections, which the party is likely to win. People’s fear that they would lose money if the opposition wins the next election is the main deterrent against the scheme.