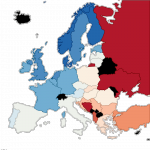 A new map of corruption in Europe

An index developed by an anti-corruption research group measures corruption through objective variables rather than the public's perception. And it comes with some surprises.

Since 1995, when it was first calculated, Transparency Internationals’ [Corruption Perception Index](http://www.transparency.org/cpi2015) has established itself as the go-to reference on corruption levels. Norway comes in 5th in this index.

The new ranking, in which Norway comes in first, is established according to a new [Index of Public Integrity](http://integrity-index.org) calculated by the [ANTICORRP](http://anticorrp.eu) project, a EU-founded research group. The index, the researchers claim, measures corruption through objective variables, instead of relying on the perception of corruption levels in a country.

And while the new measure mostly correlates with the legacy Corruption Perception Index as well as with World Bank figures on corruption control, it also shows that, in Europe, people in Italy think their government is more corrupt than it actually is, while Germans have a slightly too favorable view of their administration.

Indeed, Italy ends 27th in Corruption Perception, but 20th in the Public Integrity Index, on a list of 28 European countries for which both indexes provide data.

The criteria has been selected based on a theoretical framework by Alina Mungiu-Pippidi, a professor at the Hertie School of Governance and a team at the European Research Centre for Anti-Corruption and State-Building (ERCAS). ANTICORRP researchers also use a broader definition of corruption, which also includes the attribution of public contracts or funds to political friends, among other criteria.

Corruption remains an issue in Europe, Mungiu-Pippidi said during [a recent meeting on anticorruption](http://bruegel.org/events/fighting-corruption-from-headlines-to-real-impact/) at the Bruegel think tank, in Brussels. It’s accounting for half the lost of trust in European institutions between the last two rounds of European elections. “If all EU countries were to control corruption at the levels of the most advanced EU states, we would immediately earn half the EU budget for this year,” mostly in taxes, she said.

Yet, Europe has been doing more than ever in its existence to fight corruption, added Carl Dolan, director of the Transparency International Europe Office in Brussels, even if European legal frameworks remain weak and more still needs to be done.