Voxeurop community Brexit and the media 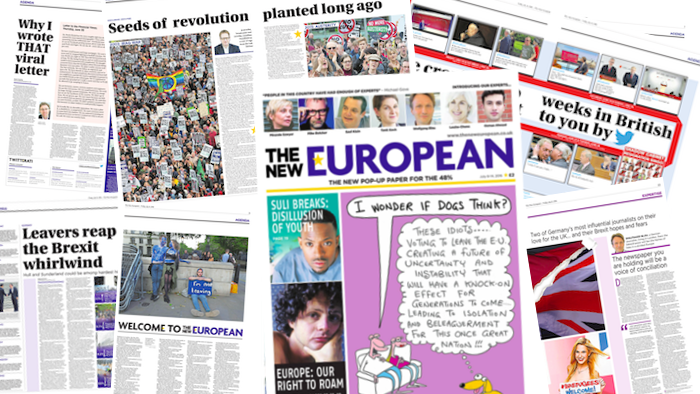 Voxeurop community Brexit and the media

A newspaper for the 48 percent

In just ten days, a weekly newspaper for the anti-Brexit voters has been launched in the United Kingdom. It aims at providing them "in-depth analysis of the Brexit process, its implications and progress as well as a celebration of European life and culture".

A new weekly popped up in British newsstands on this 8 July: The New European. Although it shares its name with a few Brussels-based newspapers and think-tanks, the paper specifically targets the 48% who voted to remain in the European Union in the 23 June referendum.

The New European is published by the Norfolk-based Archant, which is planning to publish four issues initially. “Reader interest will decide whether it lasts beyond a month. Distribution will be focused on areas that voted strongly for remain, such as London and the south-east, Liverpool and Manchester”, reports The Guardian.

“The New European will provide in-depth analysis of the Brexit process”, says the newspaper’s site, “its implications and progress as well as a celebration of European life and culture with contributions from some of the most respected journalists and opinion formers from the UK and Europe.”

“The New European is not aligned with old political divisions but with an enthusiasm and love for Europe” – the latter being rather unusual in the United Kingdom, although the massive rally on 30 June in London showed that there are actually quite a few people who still value the UK’s membership of the European Union.

It was the outpouring of enthusiasm and anger from the “Remainers” and their critic assessment of the way the British press covered the referendum campaign – and the EU in general – that prompted the publisher to think about “a printed product that reflected very clearly the values of the 48 percent”, says The New European’s launching editor and Archant Chief content officer Matt Kelly. In his opinion, they counted only on “a couple of newspapers traditionally perceived to be on the left of British politics, but both of which had seemed uncommitted to the Remain cause up until the last moments of the campaign, by which time it was — evidently now — too late.”

After the referendum, Kelly adds,

the sense of dismay and disenfranchisement has continued without any sign of fading. The fact that the Leave camp is so openly clueless about what the plan is now only adds to the sense that this is a self-inflicted wound of elephant gun proportions.

The unusual business of launching a print newspaper without any market research has been achieved thanks to short-term expected lifespan of The New European – a month, maybe more – and to the fact that the readership already exists: it’s the 48 percent.