The European press on German election 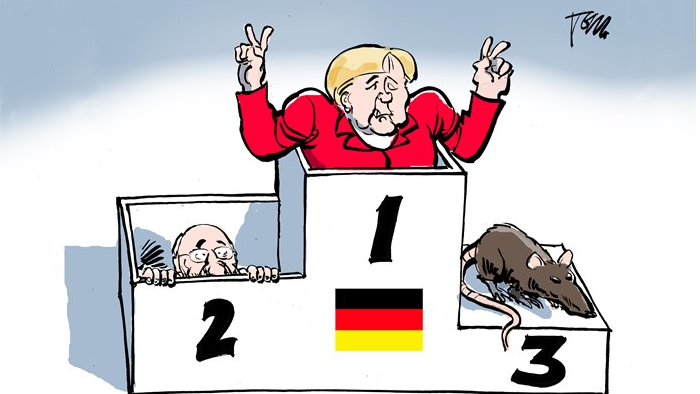 The European press on German election

‘A shock for Germany, but also for all of Europe’

Angela Merkel may have just won her fourth consecutive federal election, but her party, the CDU/CSU, have still suffered a major setback. Meanwhile, the SPD have also suffered significant losses despite leaving the coalition, and the far-right have made a triumphant entrance to the Bundestag, argue German and European editorialists.

The SPD has been punished, while the AfD have never been so strong. The only remedy against the rise of the far-right is to remain calm and objective, as Angela Merkel has always been, writes George Löwisch, editor-in-chief of the Tageszeitung:

Angela Merkel was the queen of the polls, and it was with that certitude that she ran her campaign. But she emerges like a beggar, with a miserable result. With the presence of AfD deputies in the Bundestag, Merkel will be confronted with her own political failure. For one who has lead the country for so long can be sure to have contributed to the rise of these fearmongers.

“Merkel wins again, but it’s a pale victory: the CDU-CSU have lost much of their support, and their former coalition partners, the SPD, have been similarly punished. Despite this, Merkel is the only leader of a large country to have survived the major crises of recent years”, notes Arnout Brouwers in De Volkskrant. Brouwers also notes that –

The rise of the AfD and the rebirth of the FDP, being eurosceptic and liberal-conservative parties respectively, seem to be the response of numerous Germans to the problems that Merkel’s centre-left coalition ought to have confronted. According to recent polls, terrorism, immigration and extremism are, for the majority of Germans, the main problems that Europe currently faces.

In his commentary for the Bild Zeitung, Richard Volkmann adopts an ironic tone for the election results:

Let’s look at the bright side: Merkel is spared, and the country won’t have to suffer another Grand Coalition. But that’s about it. All that had seemed unthinkable until now has become possible: starting with a fresh election, which had been taboo in a system renowned for its stability, up to the formation of a majority government that will be lead by a chancellor who, well before 2021, already seems to rule with much less commitment than previously. And over all this lies the shadow of the AfD, whose leader shouts down his microphone, like a Hollywood bad guy, that he wants to “hunt” Merkel down and take back “our country and our people”.

“The success of the AfD, and the far-right’s entry into the Bundestag for the first time since the second world war, marks the end of the German exception. A shock for Germany, but also for all of Europe”, writes Béatrice Delvaux in Le Soir. For Delvaux –

after the results in the Netherlands and France, we believed - or wanted to believe - that the far right had been defeated on European soil, since they’d failed to achieve their expected results, and/or missed their chance at power. But in reality there was nothing to be happy about. Sunday’s election results remind us of the difficult truth: right-wing extremism is now firmly installed at the heart of our European democracies.

Unexpected, yet subconsciously feared, the result in the German elections has dramatically changed the map of German politics and, indirectly, Europe as a whole, says Gian Rusconi in La Stampa. Rusconi adds that –

Berlin has lost its political stability, despite Merkel’s win. The catastrophic defeat of the SPD is an alarm signal for every faction of the European left. Is this the end of classical social-democracy? The success of Alternative for Germany (AfD) urges us to take stock of the populists’ motivations, beyond their racist impulses. Angela Merkel is facing her most difficult challenge yet. Her government will have to deal with a double opposition, intent on having its voice heard.

“The fourth mandate of Angela Merkel will no doubt be her last. Regardless of the composition of her government, the chancellor will focus for these next four years on the imprint that she will leave on history”, writes Bartosz Wieliński, expert on Germany for the centre-left Gazeta Wyborcza. He adds that –

Merkel will try to preserve the unity of the Union and to prevent Emmanuel Macron from dividing the EU into a hard centre with peripheral zones. [...] She wants history to remember her as the leader who saved European unity and strengthened it, and as the leader who assured Germany a central position on the current international stage - whereas in 1990 it had needed the support of the great powers to achieve reunification.

According to El Mundo’s editorial, the victory of Angela Merkel “is good news, not only for German citizens who have enjoyed excellent economic management, but also for the EU, which had been waiting for the Christian-democrat candidate to be voted in so that it could revitalise the Franco-German axis and push on with a period of reforms for the Union”. But the conservative daily [emphasises] that these results require

a difficult balance which will test the negotiation skills of Merkel, who has the disadvantage of returning to the most fragmented parliament in Germany’s history. [...] If Merkel finally comes to an agreement with the liberals and the Greens, she will be obliged to make concessions on issues such as Brexit and solidarity funds for countries in the south.