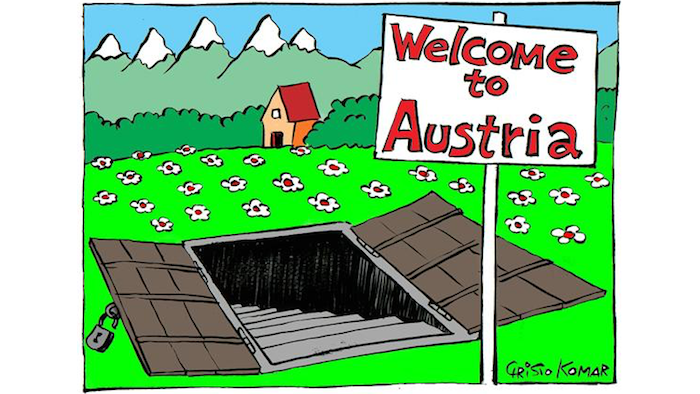 A warning that should be heard across Europe

It was a heartbeat finish. And in the end, a handful of absentee ballots gave victory to the independent candidate Alexander Van der Bellen over the far-right's Norbert Hofer. The country is more polarized than ever and the decades-lasting system of big established parties might be over.

Austrian politics isn’t made for the big screen. For decades, the country has been run by either – and usually both – the main center-right or center-left parties. Public office is carefully partitioned between the Social Democratic party (SPÖ) and the People’s party (ÖVP); there even are two motoring associations and two mountain-trekking clubs. The Austrian president does not have direct day-to-day political powers. But the possible election of a far-right candidate made Europe listen to and look at a country that mirrors many European political crises.

For decades, politics in Austria have been a series of sleepwalks from one grand coalition to the next, with no real alternatives, no initiatives or meaningful reform. This system lost Sunday’s elections; and this system of politics as usual is also losing in other European countries.

“In Austria the mainstream parties did their best to turn politics into dull mush, yet it has suddenly turned hard and consequential,” The Economist wrote: “Austria’s do-nothing coalition is on the front line of a struggle that many other centrist parties across Europe are facing.”

The second round of the presidential election saw no candidate of either party compete. The Austrian people had the choice between the far-right Freedom party (FPÖ) and the Green party. Runoff candidates Alexander Van der Bellen and Norbert Hofer could not have been ideologically further apart.

The narrow win of Van der Bellen should not trigger too many sighs of relief too soon. With Monday’s official result, still half the country voted for the far-right candidate. Most analysts name immigration as one of the main reasons for the rise of the FPÖ, but the recent European refugee crisis only added fuel to the far-right's steady rise over many years, reflecting the diminishing appeal of the two main parties.

Austria, unlike Germany, never went through a post-war reckoning. The country is not immune to a surge of far-right and even neo-Nazi parties, as the 2000-2006 coalition between the ÖVP and the FPÖ showed. Together with unappealing centrist parties, the FPÖ, under its charismatic new leader Heinz-Christian Strache, went from the single digits to about 30 percent in the polls to making 49,7 percent in Sunday’s elections.

Norbert Hofer takes a soft tone. His positions on the EU and immigration are not as extreme as what his party has previously said. Still, Norbert Hofer is member of a far-right student association, and co-authored the FPÖ party handbook, a document similar to the party program, which includes many extreme-right positions.

But for half the electorate, voting for a far-right candidate isn’t taboo anymore. Hofer was not only a symbolic vote, cast in the knoweldge there will be the usual ÖVP-SPÖ Grand coalition. Half the country actually wanted to see a far-right candidate with ties to nationalist groups become Austria’s president. According to an analysis from Der Standard, an important motive to vote for either of the two candidates was to stop the other one. Van der Bellen profited most from this movement, but the country still is polarized between two world views: an open, pro-European one; and a nationalistic one, promising closed borders and rejecting the EU.

Between the two rounds, Van der Bellen won over liberal, as well as Social-democratic voters. Christian-democrat voters split evenly, according to an analysis published by the state broadcaster. Unlike in France, there is no tradition of a ‘democratic front’ against the far-right. Despite backings from several party officials, no traditional party officially endorsed the Green candidate: the FPÖ could end up first at the next general elections, and both mainstream parties might consider a coalition to remain in power.

Nearly unnoticed by the European media, Austria got a new chancellor. Social-democrat Christian Kern started his mandate between the two rounds by slamming business-as-usual politics of his predecessors. He called for an end to “power-hungry and future-blind” politics. “The two big parties might instead disappear – and probably for all the right reasons”, Kern said.

The defeat of the far-right this time is perhaps the last warning to centrist parties, not only in Austria, but all over Europe. Austria has low unemployment and no major issues. One more reason to take the vote seriously.

Austria did not turn xenophobic from one day to the other. The country is not 50 percent racist. Recent events helped propel the far-right to these record scores; but the refugee crisis should not serve as excuse to continue as normal. In his first speech, Van der Bellen called for unity, dialogue and reason: “Many in this country apparently feel they are not heard or seen. We will need another form of politics, one that does not care so much about itself, but rather about real fears”, he said.

The message that voters are more and more fed-up with traditional parties, making them likely to fall for populist, extremist, simplistic and xenophobic discourse, should be heard in Austria, and across Europe. And quickly.