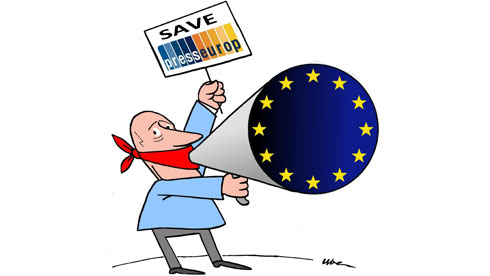 ‘A window on the lives of Europeans is shut’

Launched in May 2009, Presseurop, in its present form, will close down on December 20 due to lack of funding. This marks the end of a journalistic experiment with a civic dimension, says the European press.

When it was launched in 2009, "the European Commissioner responsible for Communication, Margot Wallström, described Presseurop as ‘the expression of our desire to facilitate, to encourage and to support the creation of a European public forum for communication, discussion and debate'", says Italian news web site Lettera 43. Today, says the website,

despite the statements of respect and of its recognition by the experts and just a few months ahead of the May 2014 European elections, a time when citizens will need to be informed, to vote and to decide on the future of institutions, Brussels chooses to cut back on the flow of information.

"A window on the lives of Europeans is shut," notes French Catholic daily La Croix. "It was held wide open by Presseurop," says the paper, deploring

a loss for the mutual understanding of the residents of the 28 countries, just six months before European elections in which Eurosceptics are expected to achieve a breakthrough.

"For four years, Europe had a fine and independent transnational media, says Dutch web site VillaMedia. The site, which specialises in media news, adds that

Presseurop seemed like an excellent way to begin a dialogue and conversation between the EU and its citizens. [...] Rather than giving it time to come to fruition, this precious project is being eliminated.

"When I added Presseurop to my bookmarks, I was unaware of its usefulness, of its prestige and of its impact," says European blogger, Nacho Segurado.

I just kept it as a source because it seemed an important publication, the embryo of a great, pan-European media which many of us feel is lacking. If Europe wants to become a nation – and that means what it means – it is vital that it has its own press.

[[Presseurop "made us believe that the 'European Dream' is tangible"]], adds Mircea Vasilescu, editor-in-chief of Romanian weekly Dilema Veche, in an opinion piece printed in daily Adevărul

By giving readers from all over the world the opportunity to comment, in their native language, on important European issues, Presseurop took a major step towards the creation a public European space. Something the European Commission has wanted for many years but never managed to achieve. [...] Of course, the world will not collapse if Presseurop disappears. But the decision to close the site is a bad sign for the future of Europe. [...] Without Presseurop, the ideals of the European construction will, more and more, become nothing more than talk.

After four and a half years of activity and several months of uncertainty over the fate of the site, "this loss, caused by the disappearance of Presseurop, reveals the isolation suffered by European affairs in the media," says French media blog Décrypter la communication européenne:

Among the Europe-specialised media – focused on the Brussels machine and reduced to an audience of experts and specialists – and the national media, which is far from the heart of European power and which restricts its correspondent to the bare minimum, Presseurop cannot be classified. It explores unknown territory and for this reason is bothersome. [...] Presseurop is a digest whose disappearance seems to mark the death of an ideal – one based on a certain kind of news media about Europe, for Europeans.