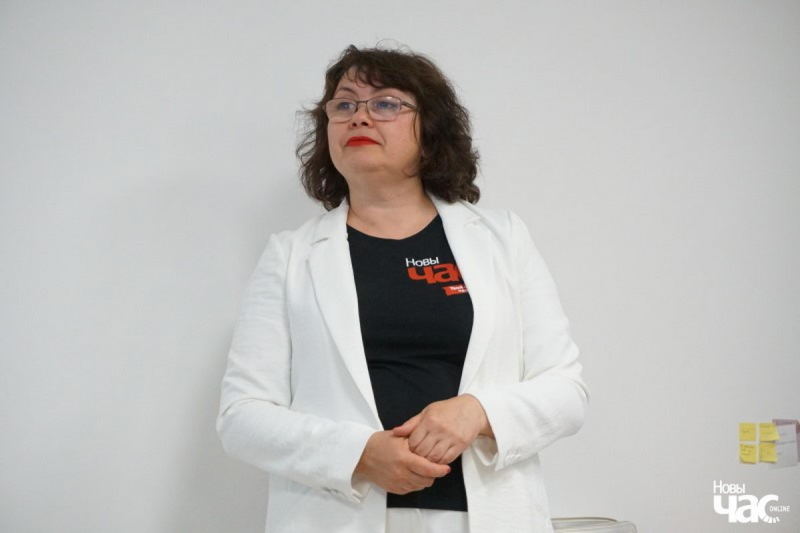 A woman, her newspaper and an entire sector under attack in Belarus

In Belarus, Lukashenka’s regime continues persecuting independent media and silencing critical voices while at the same time attempting to renew the dialogue with the EU. On 20 April the editor-in-chief of Belarusian leading outlet was brutally detained by special forces. 26 journalists and media professionals remain behind bars.

On 20 April, Belarusian special forces raided the home of Aksana Kolb, editor-in-chief of the independent newspaper Novy Chas (New Time), in riot gear, with shields, carrying sledgehammers. They acted like they were arresting a dangerous criminal, rather than escorting a 53-year old journalist and grandmother to yet another interrogation. In today’s Belarus, independent media workers are labelled as “extremists” and treated like terrorists. On 22 April, Ms. Kolb was charged with Article 342 of the Criminal Code (Organizing and preparing actions that grossly violate public order, or active participation in them) and transferred to a KGB prison.

Ms. Kolb might not have expected the police on that particular morning, but their egregious actions were hardly a surprise to her or other local journalists. Since the August 2020 presidential election, the situation regarding freedom of expression in Belarus has been among the worst in Europe. Media outlets and journalists face unprecedented repression. According to the Belarusian Association of Journalists, the government has detained journalists over 650 times, arrested and sentenced more than 130 media workers on administrative charges, and used violence against and caused injury to 80 journalists. More than 60 media representatives are under criminal prosecution; 26 are behind bars.

While Novy Chas and other outlets have suffered persecution in the past, today the entire independent media sector is under attack. As has been the case with dozens of publications, the government forced Novy Chas to stop issuing its weekly paper, blocked its website, repeatedly detained its journalists and photographers, and searched its editorial office and the homes of its employees. In November 2021, its founder – the Belarusian Language Association, one of Belarus’ oldest NGOs – was shut down by the authorities. Ms. Kolb was interrogated several times as a witness and suspect in other politically motivated cases. Despite the risk, she refused to flee the country, choosing to remain close to her paper’s readers. While Novy Chas was forced to stop its print edition, it continued to appear online – on its website, social media pages and messenger channels.

More : Back in the USSR – again

Until 2020, Novy Chas was a niche publication targeting the country’s intelligentsia. Led by Aksana, who frequently authored op eds, it was not linked to any political force but was uncompromisingly pro-democratic and pro-Belarusian. Novy Chas was the only national weekly published in Belarusian language that focused on in-depth socio-political content, history and culture, and investigative journalism (its leading investigative journalist, Dzianis Ivashyn, was jailed in March 2021 and remains a political prisoner). 2020 was notable not only because of the protests in Belarus but also for the public’s hunger for objective and independent information. The print run of Novy Chas more than tripled and the audience of its website skyrocketed, reaching over 1 million visitors in September 2020.

Aksana Kolb’s arrest highlights the fact that, despite the government’s attempts to silence independent media, their influence remains strong. It is not surprising that the regimes in Belarus and Russia view them as a threat

Even among Belarus’ brave and resourceful independent media, Novy Chas was a unique newspaper. Since the paper began publishing in 2007, its editorial team has worked closely with human rights defenders and civil society groups. It not only featured human rights and civic activists, but also distributed free copies to political prisoners. For many behind bars, Novy Chas was their only source of independent information and only link to the outside world. After their release, prisoners related how they had read the paper out loud to their entire cell and displayed copies that had been passed around to the point of falling apart. After August 2020, when the sites of online media were blocked, grassroots groups distributed hundreds of issues of Novy Chas by hand to neighborhood mailboxes.

This time, after a lengthy interrogation, Ms. Kolb was detained and placed in Akrestsina Prison, Minsk’s infamous detention center. It is a “standard procedure” for the authorities to hold suspects for up to 10 days, after which they must either release them, file official charges or detain them again for another alleged offense. Her case is one more example that persecution is unremitting against the few independent media still left in Belarus. Interestingly enough, this repression is taking place at the same time that Belarus’ Minister of Foreign Affairs dispatched official letters to EU governments and the international media calling for a new dialogue in the hope that it would lead to the lifting of sanctions against Belarus.

Since the first day of Russia’s invasion of Ukraine, Belarusian independent media have carried out timely, systematic and professional reporting on the war. They are providing Belarusians with objective information, detailed analysis and human-interest stories that counter the propaganda and disinformation coming from Belarusian and Russian governments and state media. Moreover, after the Kremlin shut down Russian independent media outlets in February and March, Belarusian digital media became an important source of information for Russian society. Independent Belarusian news sites observed an increase of traffic from Russia and some launched special projects targeting Russian audiences. As a result, several Belarusian national and regional online media – including Novy Chas – were also blocked in Russia in March 2022.

Aksana Kolb’s arrest highlights the fact that, despite the government’s attempts to silence independent media, their influence remains strong. It is not surprising that the regimes in Belarus and Russia view them as a threat. Belarusian journalists continue to work effectively and provide citizens with independent and unbiased information, despite the extreme conditions inside and outside the country. But the Belarusian democratic forces, including independent media, need more international support and solidarity, which might help to free Aksana and the country’s more than 1,100 political prisoners.

On 20 April 2022, Committee to Protect Journalists (CPJ) issued a statement calling on Belarusian authorities to immediately release and drop any charges against Ms. Kolb.

You can write to Aksana Kolb by mail at: Pre-trial detention center No. 1. 220030, vulica Valadarskaha 2, Minsk, Belarus.