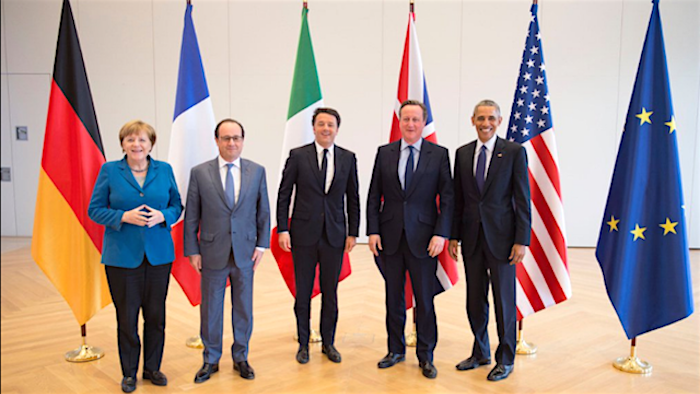 The presence of the EU flag without anyone beneath to represent it at the recent Hannover summit is testimony to the secondary role that Europe plays on the international stage.

“There is something amiss in the official photo of Obama and European leaders gathered yesterday in Hannover,” writes Lorenzo Ferrari in Il Post: “*on the right-hand side of the image, there is a strange asymmetrical element – a European flag by itself. It could almost be a compositional mistake, an oversight by the protocol team. Maybe, the historian asks, Jean-Claude Juncker had just then decided to nip to the toilet?”

And yet “there was no mistake, no hitch. At the summit between Obama and the main European leaders, the President of the Commission had simply not been invited, even though the discussion involved issues he too is working on. What’s more, Obama had just given an impassioned ‘speech to Europeans’ that described European integration as ‘one of the greatest political and economic successes of our era’” and, Ferrari adds, stressed “’that a united Europe – once the dream of a minority – remains the goal of a great number of people and a necessity for all of us’.”

But the situation the US President encountered “is quite different from what he describes,” Ferrari continues:

A situation beautifully illustrated by yesterday’s photo. A united Europe is a rhetorical and marginal presence; the real Europe consists of four leaders who often disagree with each other. The marginalisation of the Commission is now taken as a given to the extent that no one seems surprised by this odd photo, not the press and certainly not the politicians who do not seem have have noticed Jean-Claude Juncker did not attend the summit.

In Brussels, the photo did not cause any confusion:

at the press conference, the Commission’s spokesperson announced that it was not at all a problem: European leaders are able to discuss any issue directly concerning the Commissions without even having to pay it lip service.

Ferrari concludes by arguing that from now on, “our common institutions count for nothing in practical terms” and “they no longer even ask to count for something”:

The European flag has not become the symbol of a federal super-state, but a simple ornament that is fit only for framing the edge of a photo.