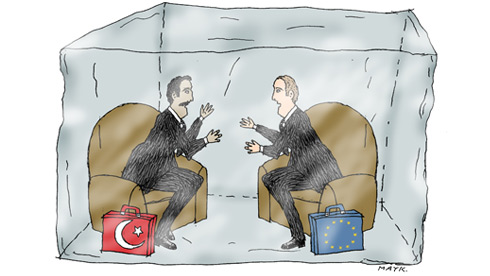 Although a member of numerous regional and international organisations, Turkey is still not in the EU, despite negotiations dating back some 50 years. A columnist wonders if the the country has missed its chance to become anything more than an auxiliary to US foreign policy in the Middle East.

Since the beginning of the 1960s, Turkey has planned on joining the European Union. At the time when this process began, the union, which was then called the European Economic Community, had only six members. Today Turkey is still involved in accession talks with the European Union, which now has 27 members and will shortly welcome a 28th with the inclusion of Croatia [on July 1].

In view of this context, you might assume that Turkey was very much an active player in world politics. But is this the true story? In any case, I am one of those who, right from the start, argued that Turkey could not join the European Union.

Regardless of how you view the Union and the integration process, you have to admit that both of these concepts have to be based on shared values. Given that Estonia, Lithuania, Romania and Bulgaria are part of the EU, and now that Croatia is about join, it is worth wondering: why should Turkey not be a member of the Union?

In my view, these countries became members of the EU for reasons that are first and foremost political. In the early 1990s in the wake of the collapse of the USSR and the end of Comecon [the economic organisation of the Soviet Bloc], the view was that it would be necessary to regroup these countries in a structure to prevent them from being reabsorbed by Moscow’s sphere of influence.

The structure best suited to this purpose was the European Union, and this policy was encouraged by the Clinton administration. Croatia, which was close to Germany, played a critical role in the breakup of Yugoslavia. That is the reason why I believe that it really deserves its place in the European Union. On the contrary, there is no political reason to justify Turkish accession to the EU. And even if Turkey is flirting with the Shanghai Cooperation Organisation, even if it claims that it amounts to a viable alternative, everyone knows it will not be possible. Moreover, some consider the idea to be a political joke.

The reality of its political role is that Turkey acts as a second class subcontractor for the United States in the Middle East. The lack of political awareness in large sections of society, the calibre of Turkey’s politicians, the quality of its media, the capacity and the level of our entrepreneurs and civil servants have unfortunately all helped to confine Turkey to this supporting role.

We should not delude ourselves with terms like co-president [an allusion to Turkey’s co-presidency of the Greater Middle East Initiative launched by George W. Bush, which was the subject of intense criticism in Turkish nationalist circles], but rather take stock of this sad reality. I use the term “second-class subcontractor” because I cannot find a better one to describe our situation with regard to the largely preferential treatment accorded to Israel.

For as long as large sections of our society have yet to develop a greater awareness of their citizenship, we will continue to be beguiled by empty notions about ourselves, but the situation of our country will not change.

“Turkey will never be part of the EU,” announces the headline of an article recently published in the German tabloid Bild. But “what Bild does not realise is that the word "never" does not feature in the lexicon of the EU,” says Milliyet, which points out that the EU has kept the Turks waiting without saying if their patience will ever be rewarded. For the Istanbul daily,

We have now reached a point where the central question is no longer 'Will Turkey ever be be a member?' but rather 'Does Turkey still want to become a member?'

However, the newspaper continues —

Political decisions in EU member states, which are linked to the economic situation in those countries, will have a decisive impact on Turkish accession. [...] The major fear in Ankara is that the trend of 'letting citizens decide' will become standard practice in the negotiation process."