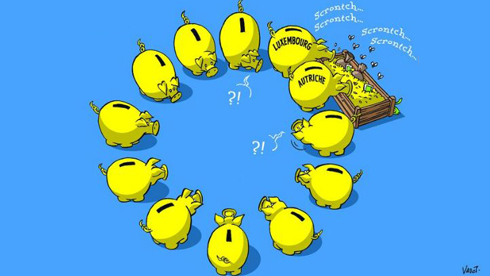 All talk and little action

European leaders have decided to reinforce the drive to fight tax evasion. However, the shortfall between their stated objective and a real political will for change has undermined their credibility, argues an Austrian columnist.

Rarely have EU heads of government been more unanimous than at the one-day meeting on tax evasion. Announcing that fraudsters would be deprived of any room for manoeuvre, they insisted it was unacceptable that honest taxpayers should shoulder the burden of austerity packages and euro bailouts while an anonymous and irresponsible few dodged their obligations by duping authorities with multiple companies and tax structures.

This is the logic of the planned response: transparency on banking data and the closure of tax havens. Two topics that were the subject of much bluster by [Austrian] Chancellor Werner Faymann and Chancellor Angela Merkel, both of whom are preparing for election campaigns. For his part, Prime Minister David Cameron, of all people, was also keen to hammer home that the UK also wants to clean up tax havens.

Who would oppose such noble goals? No right thinking person with any concern for the collective good would dare to object. However, the much more crucial question pertains to the credibility of the government leaders, who spent less than two hours debating the issue, and the difference between their fine words and reality.

And the answer is simple: they are quite incredible. Their decisions amount to little more than a rehash of ongoing projects and proposals, which have already tabled (in some cases, years ago), dolled up with stock phrases like "tax loopholes must be closed". It is almost a joke when prime ministers urge their ministers of finance to adopt by July of this year European legislation to counter VAT fraud, which they had dropped only a week ago.

Remarks by the prime minister of Ireland, the current holder of the rotating EU presidency, who insisted that his country does not offer special tax deals, should also prompt some smiles. What about Apple and the others?.

Nor is Austria immune to such hypocrisy on fiscal matters, what with the chancellor banging on about the will for the rapid implementation of the automatic exchange of banking information. His speech does not fit with the facts. If he wished, the government could immediately give up Austria’s opt-out from the European directive [on the automatic exchange of information], which is something it should have done years ago. But did we see a proposal to this effect? Not likely. And why? Because instead of an accord on fiscal transparency, our government has given priority to an agreement on the deduction of tax at source with Switzerland and Liechtenstein. All of which is quite understandable: between now and the end of next year, this policy will add an estimated €1.5bn to the state coffers.

"The EU sends a message" against tax evasion, writes Spanish daily El País. During the European Summit on May 22, member states took action aimed at ensuring "that everyone pays their taxes". The measures, to be approved by the end of 2013, concern the automatic exchange of data, the modification of the EU's savings income directive, VAT fraud, profit remittances between parent companies and subsidiaries as well as money laundering.

The paper, which notes that the EU has "the well-honed habit of devising ambitious projects but of attaining results that are well below," says that if this agreement "is swiftly implemented, many things will change in Europe. For the better".