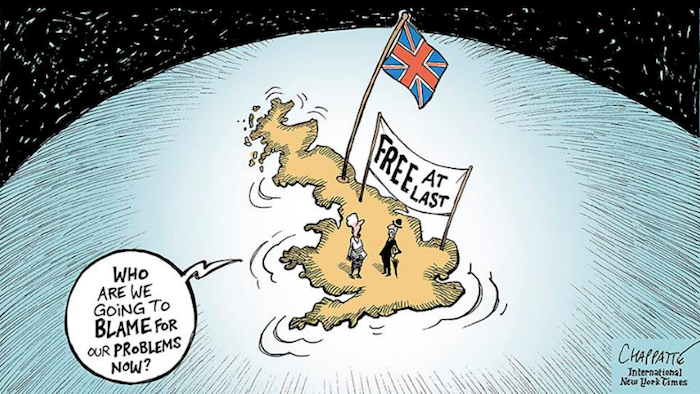 ‘An immense blow to the European project’

On 23 June, British voters decided to leave the European Union in a referendum organised by Prime Minister David Cameron. The outcome triggered a shockwave through Europe and a widespread feeling of pessimism about the future of the EU, which is reflected by the European dailies.

The results show that 52 percent of voters chose Leave, while 48 percent – mostly in London, Scotland and Northern Ireland – voted Remain. The latter option was also chosen by the vast majority of 18-44 year-old voters. On 24 June Cameron announced he will resign as Prime Minister and leader of the Conservative party, while Scottish First minister Nicola Sturgeon announced that "a second referendum" on Scottish independence "is on the table."

"No one except the continent’s nationalists can welcome this result with satisfaction", writes Laurent Joffrin. For Libération's editor,

The forces of openness, exchange and tolerance have been severely shaken by the supporters of mistrust and isolated sovereignty. The fear of foreignness, which is contaminating the most democratic of opinions, has now played a devastating role in this outcome, aimed as much against immigrants as against Europe. [...] For the European Union, the defeat is resounding. While difficult to foresee, this snub is not difficult to explain: a soulless Europe, without a common project, without a consistent reaction to the migration crisis, without an effective plan to banish economic malaise, can no longer convince voters.

"The EU may perhaps make the separation process so tough for the UK that no other country will want to go down this route", believes Frankfurter Allgemeine Zeitung columnist Patrick Bernau. He argues other countries might now "head for the exit",

like Denmark, the Netherlands or Slovakia. Germany will now have to think carefully about how it should position itself in the EU without the relatively pro-market Britons. The EU has many advantages and many drawbacks, which need to be discussed rationally. The EU has consistently helped to dampen down power struggles within Europe and therefore ensure peace – and it helps Europe to stand up to other parts of the world, particularly in trade negotiations. On the other hand, the EU’s attractiveness has been neglected for too long. Different countries have been lumped together in one basket, EU supporters have pushed too hard for political union when there is no corresponding European public realm. One thing is certain: an EU that operates ever more according to northern Europe’s rules is not necessarily in Germany’s interest.

The chief of El País op-ed section José Ignacio Torreblanca believes that "the victory for supporters of Brexit is an immense blow to the European project", and wonders "what will happen now":

There is the paradox that the self-confidence displayed by a majority of Britons to leave the EU coincides with the dejection felt in the rest of Europe regarding their decision, and with the enthusiasm shown by the continent’s europhobes, who have welcomed the move and seek to imitate it. Since the British referendum, the EU resembles the UK of 1973: lost and disoriented, overcome by events, without a clear plan for the future. After years of bailouts for member states hit by the financial crisis, it is urgent to save the European project. That requires Europe’s leaders to set out a plan and to give it steadfast political support.

"The British people has voted to leave the European Union, and has gone against its own government, its political and economic leadership and the desire of Britain's allies": Peter Wolodarski writes in Dagens Nyheter that Europe is "witnessing is a political earthquake, whose consequences are only just unfurling. What we do know now", he adds,

is that British and European politics will change radically. Britain will abandon the project created after the war to ensure peace and stability. Its withdrawal will be extremely complicated and raises questions about the future of the EU. Will more countries leave? The EU is now frail and wounded. And the future of the Britain’s Union is highly uncertain. In Scotland, where people largely supported continued EU membership, plans are afoot to leave the UK. This is a tragic moment for all those who want to maintain an open, democratic Europe that is characterised by cohesion. The worst has happened. May the consequences for the world be as gentle as possible.

There's no doubt that "The European Union has suffered a major slap in the face", says Le Monde's editorial, according to which the EU –

was rejected on Thursday 23 June by a majority of British voters. In its stark and brutal truth, this is the lesson we can draw from the referendum organised by Conservative Prime Minister David Cameron. It means the EU’s second largest economy – after Germany – is to leave the European project. It means one of the few countries in the EU to have serious military clout and a meaningful diplomatic network has abandoned Europe. However one looks at this sad affair, it is a defeat for the EU, which leaves it weakened within its borders and whose image abroad is of an actor in decline.

London correspondent for Helsingin Sanomat Annamari Sipilä writes that "The shocking results on Friday morning show that the Conservative Prime Minister David Cameron took a decision that was fatally wrong from the start":

Cameron promised the British a referendum with the purpose of strengthening his position and that of his party. He knew euroscepticism was widespread in Britain, and he knew that such plebiscites are not always decided by the issue at hand. He nevertheless took the risk and promised the referendum. Now it's time to face the consequences. […] The stakes were high, and Cameron has lost - as have Britain and the entire Europe Union.

"In the coming days and weeks the centrifugal forces already at work will slowly but stubbornly try do jeopardise the European Union", foresees Gazeta Wyborcza's correspondent in London Tomasz Bielecki, arguing —

European integration is no longer irreversible, and there's a scent of a domino effect. Brexit will bolster populists from other EU countries. Traditional parties will have to fight to overcome the paralysing fear of losing votes to take the necessary decisions to save the Union. Europe has decreased substantially - literally, but also economically and geopolitically - in the eyes of Russia, China and America.