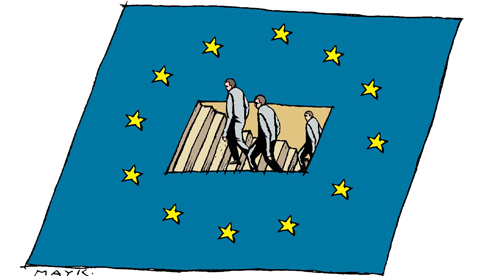 Bring on the opposition

Many people criticise the EU for poor transparency and democratic deficit. However, the problem lies elsewhere, believes sociologist Armin Nassehi. What is lacking is a true transnational opposition, firmly at home within the European Union institutions.

Enthusiasts for and critics of the European political scene and its transnational decision-making procedures share a consensus: the diagnosis of a democratic deficit. For the enthusiast, this is lacking mainly because there is no European awareness and no European public. But such an awareness, critics point out, cannot be expected to emerge from the differing national cultural, economic and political realities – primarily the economic realities, of the moment.

Where the European democratic deficit appears to lie is in the lack of an opposition – that is, in the political organisation of viewpoints that do not command the majority.

A basic principle of democracy is that public offices are legitimised by majorities and occupied through more or less direct elections. Such positions manifest themselves as democratic only if they are filled for a certain period. It is not the voting-in that is the ultimate act of democracy, therefore, but the explicit voting-out. And so, to allow the voting out of an official, there must be room for an opposition to be established inside the political system for those who do lose their seats in government and yet still represent a constituency. This opposition must be equipped with the corresponding means and competencies, an appropriate agenda, staff, and must have responsive constituencies.

Acknowledging this, we can more accurately measure the democratic deficit in Europe. The majorities can indeed be changed in the European elections, which does have consequences for the concrete political decisions taken in Europe. But it is not, in the end, a clear voting out of office that marks a decisive point and renders the political communication intelligible to the public.

Europe's lack of transparency is not due to inscrutable structures or to excessive bureaucracy. National political arrangements are no less complex. Europe seems particularly complex because there is no platform for the government and opposition to make the European political process visible.

One might say that European politics suffers from the flaw that it can only be measured objectively. It is more closely judged on results, more so than the politician who must prove himself in the debates over alternatives before an audience before weighing up and planning for his own potential removal from office.

A lack of alternatives

One consequence of this lack of an opposition in Europe has been the renationalisation of political communication during the European crisis. There is no opposition policy, no voting-out option within the system, no alternatives within European politics and its institutions – at least none that would have been presented to a constituency. The only opposition that has a public profile is almost exclusively the one promoting anti-European positions, which poison European politics through re-ethnicisation and re-nationalisation.

Correspondingly, alternatives then appear as alternatives between national models, and not as alternative European-level political solutions. That the anti-European political party currently taking shape in Germany calls itself Alternative for Germany (AfD) is only a natural extension of this.

Such movements will restrict the freedom of action at the national level – and will form no opposition at the European level. The AfD corrupts European democracy because it constitutes a form of nay-saying opposition that will never be able to, nor want to, govern. Europe needs criticism, much more than it ever did before. But what it needs is a criticism and opposition of European policy from a European perspective.

Pro-European campaigns should rely less on avowals and impositions of solidarity. Those are easy enough to get, but matter only if a European government can be voted out – only if something like the European Commission's Loyal Opposition can gain credence in the eyes of the public. This would, almost by itself, create a transnational European public.

Paradoxically, Europe could learn much from the history of nation building. The European nations could establish themselves as a political entity only if they could integrate internal forms of opposition and make them manageable. For that reason, Europe will probably have to draw up a common Constitution – to allow an opposition to be active in Europe, against Europe, for Europe. One has to be able to throw out the European government without throwing out European governance.