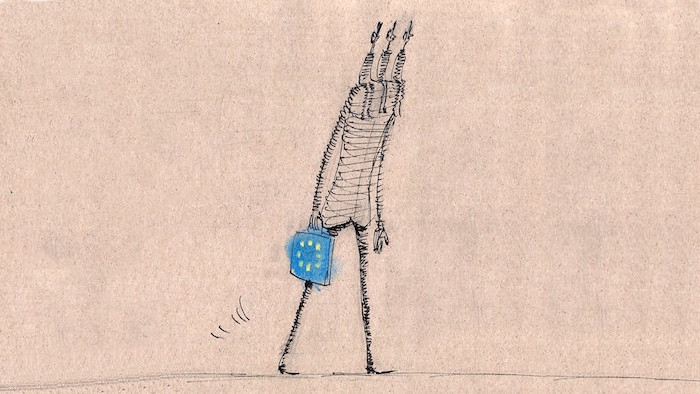 Building the United States of Europe

If Europe is currently stuck, it’s at least partly because its institutions are not adapted to the global power it aspires to be. Those institutions standing in the way of a truly democratic and sovereign Europe should therefore be abolished, suggests a representative of Pulse of Europe.

Facing an institutional crisis which has long been judged structural rather than conjunctural, the EU no longer dares to claim with any assurance that it has the power to achieve by 2025 a European construction capable of protecting European citizens in a world of political giants jostling with and imposing upon smaller states. Its organic structure is a kind of confederation of 28 collectively policy-making states, which, with all its vacillations, has become self-defeating.
Its powers are sovereign when it comes to money, external borders, international trade negotiations, those of a traditional state… yet these powers are nonexistent when it comes to taxation and social policy. It’s budget percentage is risible compared to that of the USA. The EU fails to take adequate precautions since the crisis of 2008, instead transforming itself into a boxing ring for preachy governments and their scapegoats, governed by deadly regulations lacking all clarity. It’s like a rudder stuck in “straight ahead”, with no leadership to be hoped for, no true political captain elected by the crew, who might take responsibility for the 513 million passengers. Such leadership was promised; it hasn’t come. And the sea of this multipolar world is only getting bigger.

How to make reforming the EU into the USE simple to understand?

Housekeeping! When it comes to forming a great political bloc that China, the USA or Russia couldn’t but respect, the official intergovernmental structures stopped being useful a long time ago. They have become dead weight, unable to make the transition from proto-state to veritable sovereign federal state. Worse, they impede any move towards definitive authority in matters of diplomacy, defence, taxation and coherent macroeconomic leadership. As a consequence, even the Euro, which we protect from the dollar’s aggressive policy mix and the shrewd under-valuation of the yen, is far from its optimal protective potential.
Creating a Senate of States or a Senate of European Regions would remove the need for the following toxic bodies: The European Council, Eurogroup – not official, but very harmful –, The Council of The European Union. Gone. If it’s a Senate of European Regions, then the Committee of Regions would also go, since it would in effect become the European Senate.
With a finally coherent European legislature, Senate + Parliament, and according to the results of the European elections, it only remains to compose a sovereign government, a traditional Executive, instead of and in the place of the current European Commission, which few will miss, as we suggested recently.
There are just too many pieces on Brussels’ table to complete the jigsaw of a European constitutional State. The ECB, EIB, CJEU, ECHR, EP, and the European Court of Auditors are obviously worth keeping, to be joined to the Senate, so that it can properly fulfill its functions: no longer in the devastating neoliberal manner, with that European Champions’ Cup of States which ruins the confidence of European citizens themselves. Is that so complicated?

Harbour no illusions. Our heads of state are now in open hostility with one another, even tweeting occasionally like immature students. Today the house is burning because of the pyromaniacs inside, while an MEP wipes his shoes with the documents of a commissioner: what a great civic example for the younger generations of European democracies!
The homeopathic cures proposed by certain national leaders in the European Council – Paris and Berlin’s little two-step – only point to the refusal to achieve a federal state capable of taming the appetites of Washington, Peking and Moscow. Meanwhile, the quality of life in Europe worsens, and the most virulent and europhobic populisms have the wind in their sails. Barely credible reforms from above, and the national parties of traditional governments, too immobile, rendered inanimate.

Reform from below, from citizens?

In fact, yes, this is the only solution, but not from just any citizens. Citizens who know that they have two legitimate citizenships, and for whom restoring order to governmental and European powers goes hand in hand with remaining legitimate master of both levels of power, with both obeying the canons of the constitutional state. One federal, one federated, simple as that. But the same physical person in Europe, holding the right to local citizenship as well as continental citizenship since 1992, has no need to fear that the USE ends up like the EU, with one level of power overstepping its judicial bounds at any given moment.
The citizens who should most ardently take hold of this great power, having all the authority and legitimacy necessary to act as reformers of the EU, are doubtless those who suffer most from the misdeeds stemming from the current imbroglio in which the two levels of authority - never managing to cut the umbilical cord between member state and intergovernmental EU - are entangled: the reason for so much incestuous dysfunction between the two levels.
What do European citizens, conscious of being so, need?

Clear ideas to take hold of: wanting to reform the EU themselves, with their project of a better institutional structure. And pan-european cooperation, to send a strong message. Nothing else. The time has passed for waiting to see who will lead next, social-democrat, liberal-democrat or whatever else. It’s time for all democratic European citizens to join together to create from the ungovernable EU a simple, effective and legitimately accountable European State.
Fellow European citizens, EuropaNow! is waiting for you.