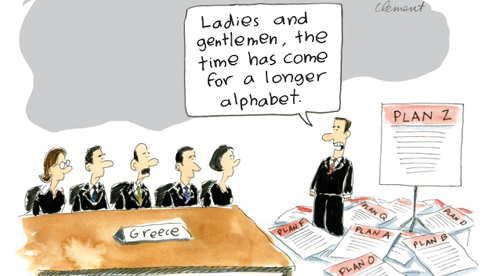 The eurozone and the IMF decided on 8 July to hand Athens a new tranche of aid in exchange for the sacking of 15,000 civil servants. If they want to lose the support of the population for the necessary reform of public services, that’s the best way to go about it, a Greek columnist complains.

The in-depth reform of Greek public administration is urgently needed and a priority for the country. The assessment of structures and personnel, as well as their mobility, should be a permanent feature of how the public service is run.
This is the only way that we can we build a modern, productive, efficient state. And it should be a feature of all reforms. If they are to benefit the Greek people, the reasoning goes, they ought to have a positive impact. But as they are sometimes pushed through in a desultory fashion, they make the people who should back them mistrustful.
Take how changes are rung in within the public service. The primary goal, for example, is to lay off 15,000 civil servants. To avoid upsetting the public, the talk is of “assessment” and “mobility”. In short, whatever it takes to achieve a goal that has already been set – the lay-offs. This belittles the importance of the Greek public service and breeds mistrust and a negative political and social climate just when modernisation is vital.

Unable to pick up the pieces

And this is all the more the case, because there is no prospect of any structural benefit that will ensue from this "emergency procedure". So, in reality, a very serious procedure has been devalued, all because the troika continues to pile on pressure with its weird ideological obsessions. The danger of such a procedure, however, is that it runs the risk of jeopardising the functioning of town halls, schools, hospitals and other public services. The manner in which the implementation of reforms is managed has a major impact on their chances of success; when almost everyone is against the reformers, reforms are very difficult to push through. Indeed, we have seen how the closure of Greece’s public radio and television was bungled. Now the members of the government have been wrong-footed and they are incapable of picking up the pieces.
Unfortunately, despite the last three and a half years of endless rhetoric about ‘reform’, it has become clear that the public service is getting worse every day, and it is citizens who are paying the price. As a result the Greek population is even more mistrustful…

The agreement for an additional €6.8bn euros for Greece is nothing short of a "recidivist spiral", writes El País. For the Spanish daily —

… the Greece-EU pattern continues: failure to meet commitments, further compromises and the disbursement of aid.The recurrent script consists of three phases. Firstly, the troika concludes that a government subject to intervention has failed to honour agreed conditions. Secondly, the concerned government seeks a compromise in which it pledges to compensate for tasks that have not been completed with other measures – cuts, reforms or both – or it proposes a scheduling modification with the objective of facilitating the handover of EU aid. […] There is no disguising the reality of this perverse pattern: countries in receipt of bailouts are forced to submit to huge pressure that aggravates their tendency to welsh on their commitments (Greece) and/or undermines governments that implement required cuts (Portugal). We should also bear in mind that the position of those supplying aid is contradictory: on the one hand they insist on austerity measures in rescued countries, on the other, they conclude, as the IMF has done, that their problems have been made worse austerity.