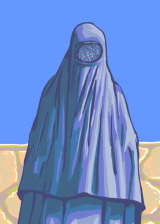 Burqa barbarous, but a ban is wrong

Le Figaroreports today that Immigration Minister Eric Besson has refused citizenship to a Moroccan man on the grounds that in his application he stated he would never allow his wife to leave the home without a burqa. Prime Minister Fillon has weighed in declaring he will sign said decree, with Deutsche Welle noting that the man also believed woman is “an inferior being”. Adding insult to injury by refusing "to shake women's hands", he invalidated his request because, according to Mr Fillon, citizenship can be denied “to anyone who does not respect the values of the Republic” and that clearly the applicant did not respect French values of secularism and equality of the sexes. “Clearly” clinches it here.

Mr Fillon and Mr Besson’s republican values on the merits of handshaking are to be commended, because the applicant is obviously an idiot, who could have been slagging off les bonnes femmes like any true-born native at the bistrot if he'd kept his opinions clear of the fateful form. However, looking more broadly at Mr Besson’s republican values and it all goes a little cloudy. This, after all, is the same man who declared himself “delighted” after sending 500 riot squad to flush out 256 asylum seekers from the refugee camp of Sangatte in 2009. Having declaring the living conditions of the immigrants insanitary, he left them to run vagabond in the French countryside where one imagines all that fresh air and trees taught them some lesson in hygiene. Sometimes it seems that bits of Mr Besson’s brain co-exist in peaceful contradiction with each other in providing dignity to some in accordance with the “values of the Republic” and destitution for others.

The point about this long-running and pointless debate about the burqa, an excrescence itself of Mr Besson’s naval licking debate on French national identity, is that it’s fundamentally dishonest. True, the burqa is a barbarous piece of clothing, but the idea of tackling it by criminalising women who wear it or by scapegoating their husbands is a piece of nonsense. The real question no-one’s asking is why, even if there only 1900 officially recorded, more and more women of Muslim faith wear burqas when their mothers’ generation didn’t and don’t. One answer to this is that the French model of integration is a failure. As author Josie Appleton has noted, the French government's republican values are now so shaky that rather than "making immigrants French, this is an attempt to make them look French." A nation that had any confidence in itself would consider the unfortunates who freely walk around with a two-man tent over their heads as socially unadapted and move on. One republican value that should be listed in any constitution is one’s right to ruin one’s life as one pleases. Don’t hold your breath on this, though. Governments all over the west are increasingly taking to micromanaging what people say, eat, drink and now wear. A burqa ban is not just a clamp-down on a backward vestimentary tradition. It’s an attempt to make us all keep up appearances as truly republican values become all too scarce.

You may unsubscribe at any time. Your email address will not be shared with third parties. *
Categories
Migration and asylumPolitics and democracySocial issues and inequalitiesSocietyFrance