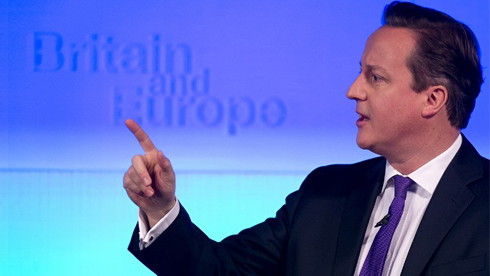 After weeks of speculation, the UK prime minister finally delivered his crucial speech on Britain’s EU future. He pledged to renegotiate a new deal with the EU before putting it to a referendum before the end of 2017. For the UK press, the speech left much doubt for the future.

“There is nothing inevitable about Britain’s departure from the EU. Yet history could well record that David Cameron has set the nation on this course”, writes Financial Times columnist Philip Stephens after the British PM spoke in London on January 23.

That was not the prime minister’s purpose when he delivered his much-delayed speech on Britain’s future in Europe. Even as he promised a tough renegotiation of the terms of British membership, followed by an in-out referendum in the next parliament if the Conservatives win the 2015 general election, he was making the case for staying in. This was politics as tightrope walking – a speech calculated to hold together a fractious and increasingly eurosceptic Tory party, rather than expressing bold statesmanship.

“Britain will get EU referendum”, headlines the Daily Express claiming a front page victory for its campaign to hold the vote. Columnist Patrick O’Flynn observes Cameron announced his intention to lead a pro-European vote, before knowing what concessions he can negotiate. He continues –

Mr Cameron has a chance to go down in history as an epoch-making prime minister by making the judgment that Britain has a better future outside the EU as a global trading nation. Given that long-term economic trends are sending Europe down the pan as other regions of the world economy grow fast, I confidently expect him to take the side of this newspaper and its readers when a referendum does take place. Many at Westminster will say that is unthinkable. But two years ago they said that a referendum on membership was unthinkable. And look at where we are now.

This decision to put EU membership to the people is “a high risk but ballsy call”, writes The Sun’s political editor, Tom Newton Dunn, comparing the move to putting “a loaded gun to EU leaders’ heads and saying: give Britain back what it wants or we may walk.” Describing the PM’s forthcoming negotiations as “a poker game with Brussels of intense bluff, and for the highest stakes” he adds that –

Success or failure in it has the potential to define his entire premiership. The PM is guilty of one of his own charges today – he too tried to ignore the gaping schism in the country over Europe in the hope it just went away. It didn’t, and today he will try to make a virtue out of that failure. Cameron is at least now tackling it head on, and for that much alone he deserves praise.

For the BBC’s political correspondent, Iain Watson, the in-out referendum decision will delight the many Eurosceptics in Cameron’s party and unite the Conservatives ahead of the 2015 election, but the renegotiation process may ultimately trigger future splits.

What the PM didn’t say today is what would he do if the negotiations deliver less than he would like. Labour and the Lib Dems say David Cameron is creating damaging uncertainty for business, but he has thrown down the gauntlet to them. Can they allow him to be the only major party leader to offer voters a say on EU membership after the next election?

The Economist’s “Blighty” blog notes that any renegotiation of the UK’s membership terms will be “minor and will carry a hefty diplomatic price tag.”

Westminster struggles to understand the vast political project creaking into life across the English Channel. For Britain, the relationship with the EU is transactional. For those nations at the core of Europe, a sense of shared destiny oils the wheels of compromise. Hence the bafflement amongst Britain’s neighbours. The notion of outright, near-unilateral demands is about as far removed from the agenda in Paris, Berlin and Brussels as it is possible to be. Yet it lies at the heart of Mr Cameron’s plan to keep Britain in the EU. Small wonder, then, that the plan looks shaky.

James Kirkup, deputy political editor at The Daily Telegraph, says Cameron’s speech pushed the focus of the European project back on an economic and market-based principle, which may be welcomed by the Netherlands, Sweden, Finland. However, others “will not react well to what will strike them as an attempt at blackmail by a leader too politically weak to resist his own party.” He adds –