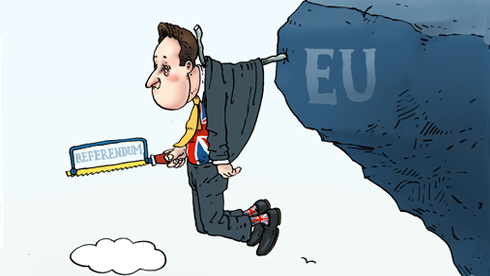 Cameron’s fate hangs in the balance

Prime Minister David Cameron thought his pledge to hold a referendum on British EU membership would calm his party’s divisions. He’s now facing a rebellion backing a withdrawal from Europe and has lost the trust of the public, writes a British journalist.

Political absurdity is often the face of deep-rooted complexity; especially so in the case of a coalition. This week, it is probable that an amendment regretting the absence of an EU referendum Bill from the Queen’s Speech will be called, and force a most peculiar outcome.

As things stand, Tory backbenchers will be granted a free vote on the motion tabled by two of their number, John Baron and Peter Bone, while members of the Government will abstain. However, some Lib Dem ministers are now expected to complicate matters further by voting against, as their pro-EU convictions dictate.

No 10’s response has been Confucian in form: “When you see a mouse come in to a room, you can either say ‘there’s a mouse’, or you can jump on a table, screaming.” Safe to say, I think, that the mouse in this kung-fu riddle is the EU referendum, or perhaps the amendment itself, and that the screaming is all the fuss that the political and media class is making.

The Prime Minister’s distaste for panic has undoubtedly served him well over the years, not least in the mind-numbing maze of bipartisan Government. The Cameroons are right to complain that some in their party act as if the Tories were not in coalition, or the Lib Dems could be safely ignored.

What should worry Cameron is the resilient lack of trust between himself and a significant core of Tory MPs. When they demand a draft referendum bill, they are saying: we take all your points about Clegg and the Lib Dems and what you can and can’t do, but even so – sorry, mate – we still want it in writing.