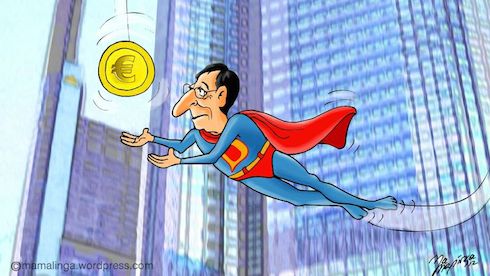 Can Mario Draghi save the eurozone alone?

For Le Monde, Mario Draghi is “the useful man of Europe”. The French daily explains in its editorial, “the man guiding the European Central Bank [ECB] knows how to weather the storm: he sends orthodoxy on its way.”

The paper says Draghi broke with consensus in September 2012 by announcing he was prepared to buy massive amounts of public debt, following a policy “destined to facilitate the distribution of credit”. And then, during August’s forum of central bankers at Jackson Hole in the United States, he called on governments to apply budgetary regulations with “flexibility”, estimating the ECB’s actions alone were not enough.

For Le Monde, it is important —

for a man like the president of the ECB to take such a line [on the need for an emergency economic policy].

In Geneva, Le Temps writes that “pressure is mounting” on Draghi as the threat of recession looms, and asks whether he will use his monthly ECB press conference on 4 September to announce a plan of quantitative easing, in which the central bank would buy astronomic amounts of assets. Whatever happens, says the Swiss daily, “the ECB alone will not save Europe” —

If the ECB can still provide a boost, it will not be a matter, as has been the case in recent years, of putting out fires in the short term. As Mario Draghi has already pointed out, the ball today is in the court of governments. That of Germany, in particular, whose public finances are among the healthiest, and which could launch a stimulus package that would benefit the entire zone. Other governments have their share of the work to do, as well, by beginning or continuing structural reforms.