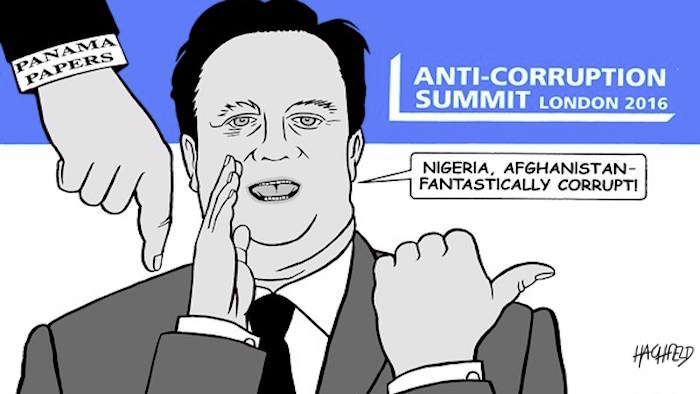 Can one really speak about corrupt countries?

Prime Minister Cameron shocked everyone by referring to Afghanistan and Nigeria as possibly some of the most corrupt countries of the world just a few days before this week’s anti-corruption summit in London. Many saw his statement as yet another instance of Western hypocrisy. Given London is famously a playground for the corrupt and Mr. Cameron’s family itself profited from stashing money overseas, it does seem odd that he is the one to point the finger. But is it justified to be politically correct about corruption? As a chair of Berlin’s Hertie School of Governance, which runs the EU’s largest policy research program on corruption and and author of the Dutch EU Presidency’s report on public integrity and trust in EU, I'm weighing up the evidence.

The Panama Papers show that elites in most countries will display a quite shameless (and selfish) appetite for privilege if a loophole presents itself. But while people from countries with a reasonable control of corruption, such as the United Kingdom, have to go to some exotic island with their money, people in countries where corruption is systemic (which number over half of all countries) need not go that far. In those countries public budgets and banks are controlled by ruling elites, who openly flaunt lavish houses, cars and incomes worth far more than their declared earnings.
Countries like these have their very own Virgin Islands within their own borders, and their populations know it. This is how the Global Corruption Barometer assesses whether their officials and indeed their countries as a whole are corrupt. In countries with tighter control over corruption, survey respondents tend to claim their national rulers merely put their private interests first. Both groups are right in identifying corruption, but there is a big difference between the two cases. The summit concentrated on closing offshore havens, but did not touch havens operating within national borders. While this may help clean up less corrupt countries a little more, it will do nothing for the others.

Another key facet in the politically correct approach to corruption is that money from developed countries is feeding corruption in the developing world. Granted, there is evidence to suggest assistance funds and even EU structural and cohesion funds can turn into a resource for corruption in countries where corruption is systemic. One Afghan leader at the summit aptly pointed out that the flow of Western money into his country was only making things worse. However, what came first was not the flow of foreign money – completely benign when invested or donated in a country with low corruption – but the ruthlessness and unchecked power of governments in recipient countries. They designed the rules to extract as many rents as possible from all public and private resources, be they local taxes or foreign investment.
Unchecked local power is the number one cause of corruption. Without tackling this, pressure on international donors makes little sense. At most, it can lead to investors avoiding countries with corruption and donors organizing aid through non-governmental channels, for example by funding international and local charities or communities. Similarly, repatriating assets makes little sense if future governments continue to act corruptly. This is exactly what happens in over eighty democracies and forty autocracies, where public resources are openly raided by whoever comes to power.

Finally, is it right to say we can only speak of corrupt individuals and not of corrupt countries? The idea was suggested by the Prime Minister of Malta, a country with a reasonable control of corruption. Once again, this is untrue, as survey respondents all over the world have repeatedly shown. Although corruption is universal and human nature tends to give in to temptation all too easily, history shows us countries have constructed constraints on corruption within national borders over time. In a minority of countries the constraints are strong enough to keep in check resources available for corruption.

Once constraints have reached this level – with, for instance, critical and engaged citizens able to sanction rent seekers, as in Iceland, where the Panama tainted PM had to leave immediately – resources for corruption, such as oil, no longer pose a danger. This is still far from the case in “fantastically corrupt” Nigeria, as Cameron called it. We can therefore speak of corrupt countries where the rules of the game normalise government extraction of public resources and where most people in power do so. Here, payments provide virtually the sole access to public services and careers are forged on the basis of connections and not merit. Inhabitants of those countries know and connect together all these symptoms. Many of the most talented people leave, preventing the creation of a critical mass for reform and reinforcing the fate of subdued populations and predatory elites.

When statistically analysing resources and constraints for corruption, we create a ranking system that clearly shows what reforms here needed. Researchers from ANTICORRP have done this in the Index of Public Integrity. It shows Norway heads the list, with Venezuela and Chad at the bottom. By addressing these areas for reform, Nigeria has the potential to progress from ‘corruption as a rule’ to ‘corruption as an exception’. None of this was discussed at the summit. There is a huge knowledge gap between making the world a cleaner place and addressing the issues of individual country. Future summits can bring further well meant and hopefully still politically incorrect contributions.