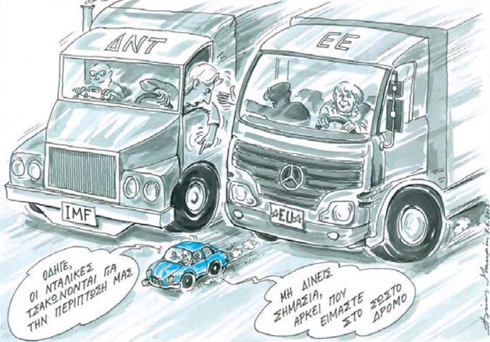 Hey, driver, the truck drivers are fighting because of us.

Ignore them. What matters is that we are on the right path.

On the trucks "IMF" and "European Union"

Following the row between the International Monetary Fund and the European Commission on the management of the Greek bailout, German weekly Der Spiegel writes that the IMF is pressuring Europe to arrange a new restructuring of Greek debt by December.

A German Ministry of Finance official told daily Handelsblatt that any new restructuring of Greek debt could jeopardise German participation in the bailout. He underlined that –

The German finance minister is only authorised to agree to loans if he is certain the money will be repaid, which would not be the case if the debt was restructured.