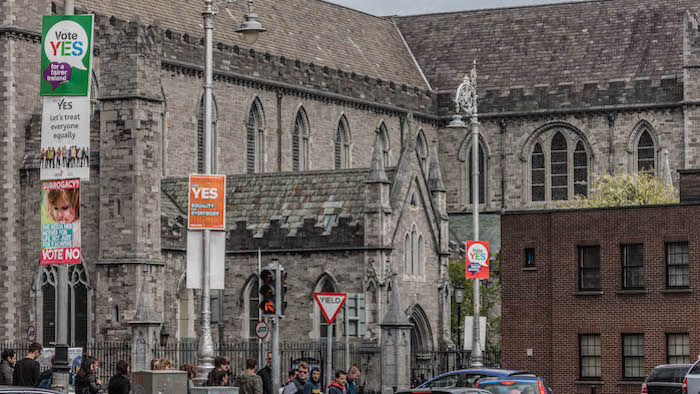 In an historic referendum yesterday, Ireland became the first country in the world to support same sex marriage by direct popular vote. In a very high voter turnout, the ‘yes’ vote in favour of equality was a massive 62.1per cent. Thousands of Irish citizens returned from abroad to cast their vote. The Republic’s constitution will now be altered to permanently enshrine this historic decision on equality by the Irish people.

In an article for Ireland’s leading daily newspaper, The Irish Times its chief columnist Fintan O’Toole writes that –

It looks like a victory for tolerance. But it’s actually an end to mere toleration. It’s saying that there’s no “them” anymore. LGBT are us – our sons and daughters, mothers and fathers, brothers and sisters, neighbours and friends.
The article continues that the vote –
is actually about the ordinary. Ireland has redefined what it means to be an ordinary human being. We’ve made it clear to the world that there is a new normal – that “ordinary” is a big, capacious word that embraces and rejoices in the natural diversity of humanity.