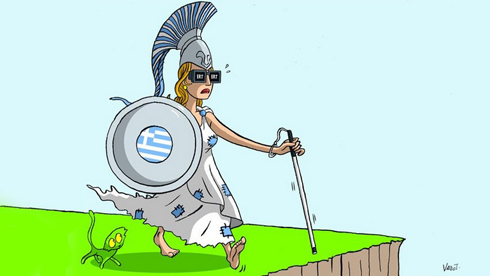 The sudden closure of state television channel ERT has split the fragile governing coalition and set the troubled country on the path to fresh elections. But a new vote could leave the nation even more divided and just as deadlocked.

The unity of Greece’s power-sharing administration is under severe strain and the country could possibly be heading toward general elections. If political memory went no further back than a year ago, it would be clear to everyone that the outcome of the May and June 2012 elections effectively derailed the nation’s fiscal adjustment programme, added more debt to the country’s empty coffers, and exacerbated recession and unemployment.

On a political level, the outcome of those two ballots was the election of leftist SYRIZA as main opposition, the emergence of Golden Dawn as the most vigorous party in the existing Parliament, the near-elimination of PASOK from the political map and growing tension within New Democracy.

There is little love for PASOK or its current leader, Evangelos Venizelos. Democratic Left leader Fotis Kouvelis may be irritating in the same way that the leader of a debating society can be annoying. Having been away from the country’s executive powers – barring some very short breaks – the Left has a rather theoretical understanding of politics.

But these are the only politicians Prime Minister Antonis Samaras can depend on at the moment. And he has an obligation not to insult their dignity, not to present them with tough dilemmas – regardless whether the issue at stake is a serious or an insignificant one and whether they beg to differ on certain issues.

The crisis has underscored the primitivism of the Greek political leadership. The politicians of the European north tend to work for the stability of the system and its adaptation to the needs of a constantly evolving environment. In the minds of the Greek political leader it is all about self-affirmation and survival. He is allergic to others. He is the provincial man on the European stage.

New Democracy could well win the next election but neither PASOK nor Democratic Left would again join hands with Samaras, leaving the country in a deadlock. Even if a government were formed, the prime minister would be different, so the risk of a deeper conservative break-up is evident. But even if ND were to achieve a full majority in Parliament, on the back of Greece’s electoral law, it would find it impossible to govern as it would face all opposition parties given the absence of a rigid state apparatus and generalised corruption.

For better or for worse, the country’s two-party system is no more. Voting for Golden Dawn is a political act and expresses the will to destroy the political system – Valhalla on fire, Wagner’s twilight of the gods, not on the safety of the stage but in society.

It’s questionable if we should cry over the death of political dwarfs at a time when the country is in risk of going up in flames.

Giorgos Delastik, one of the most prominent leader writers in Greece, does not believe that Prime Minister Antonis Samaras’ decision to shut down the public radio and TV outlets – against the advice of his coalition partners – means that “the collapse of the ND-Pasok-Dimar [coalition] is imminent,”. Writing in Greek daily To Ethnos, Delastik notes that –

By brandishing the threat of early elections, Samaras also wants to “scare the people,” adds Delastik, “because only fear and violence ensure that citizens submit to the order established by the memorandum” providing international financial aid.