Ideas Civil society and the EU 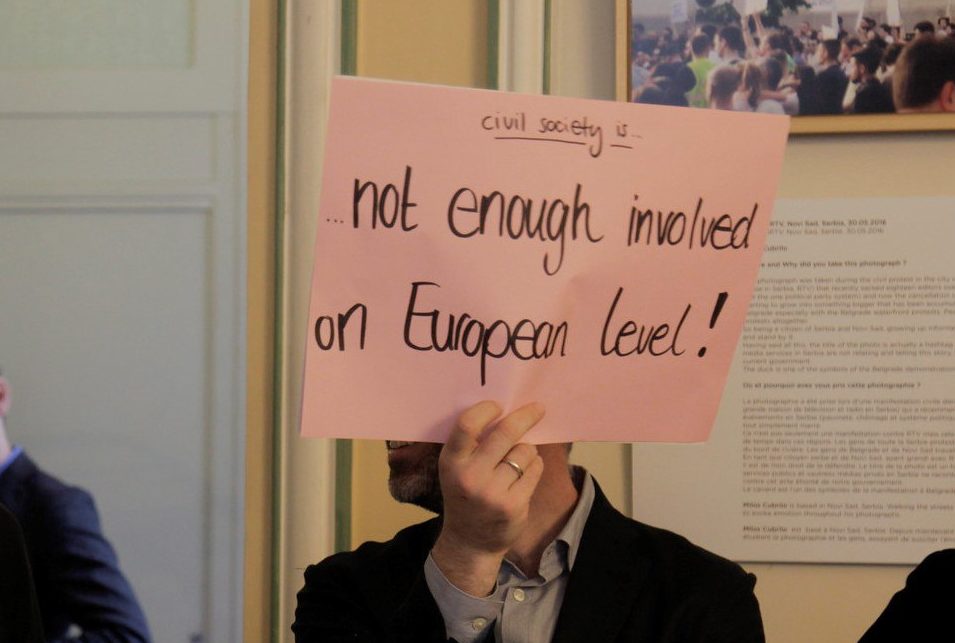 Ideas Civil society and the EU

Co-creating a citizens-centered Conference on the Future of Europe

As stated in the letter, the EU is at a crossroads in its history: the need for the European Union to transform into a social, sustainable, inclusive and democratic, and citizen-led project is greater than ever before. Citizens and civil society organisations from across Europe, call on key political figures to make true the promise of the proposed Conference on the Future of Europe to guide the EU out of the many crises with which it is confronted.

We are writing to you at the outset of what we hope will be a historical semester of the European Union. The EU is at a crossroads in its history: the need for the European Union to transform into a social, sustainable, democratic, and citizen-led project is greater than ever before. This is why we, citizens and civil society organisations from across Europe, are calling on you to make true the promise of the proposed Conference on the Future of Europe to guide the EU out of the many crises with which it is confronted.

The Future of Europe is under decision right now: the “Next Generation EU” Recovery Fund will double the EU budget to alleviate the ongoing consequences of the COVID-19 pandemic, and strengthen European solidarity towards a deeper political Union, potentially affecting every aspect of the EU’s action. The debate on the use of the biggest recovery fund in EU history cannot take place exclusively behind the closed doors of the Council. While we urge you to agree on a bold and ambitious economic response as soon as possible, we recognise that the relaunch of Europe cannot only be economic – it must also be democratic. Because of its historical importance, a civic debate on the use of funds and the long-term reforms needed should be integral to the basis on which to convene the Conference on the Future of Europe, and new mechanisms for citizens to participate in an ongoing way in the governance of the EU should be explored.

Accordingly, we call on you to:

– Ensure complete democratic legitimacy by putting citizens centre-stage in the discussions at all phases, make special efforts to involve minorities and youth, and firmly anchor civil society’s role in the Conference’s structure. Citizens must not only be consulted but also be participants, even through randomly selected Citizens’ Assemblies.

– Pledge to follow-up to any significant reforms recommended by the Conference, including the possibility of treaty change.

The need for transnational collaboration and supranational action is greater than ever before. The EU is facing multi-faceted unprecedented challenges: COVID-19 and its socio-economic implications, the climate crisis, Brexit and global geopolitical instability. These challenges can only be overcome if citizens are given a role in addressing them. The Conference on the Future of Europe offers the best opportunity to develop this shared ownership among citizens, civil society, Member States, and EU institutions. But it needs to be designed, implemented, executed, and followed-up properly in order to achieve the intended effect.

If the Conference on the Future of Europe turns into a public relations exercise rather than a real and substantial attempt to bring in citizens’ closer to the EU, the Conference will feed the narrative of the EU’s democratic deficit. To prevent this, the Conference must be carefully designed, ensuring an open, transparent, inclusive, and participatory process, including a clear role for civil society, and there must be a strong commitment for meaningful implementation of its outcome.

If the Conference has the necessary democratic character, we, as European civil society organisations, stand ready to make a constructive contribution to it, and to mobilise citizens across Europe to do the same.

We count on you to make this new era of European participation one of new beginnings.

Thank you for taking important steps to make the democratic future of Europe a priority.

The Citizens Take Over Europe alliance and supporting partners

*Please click here to read our 10 principles for a citizens-centered Conference on the future of Europe.