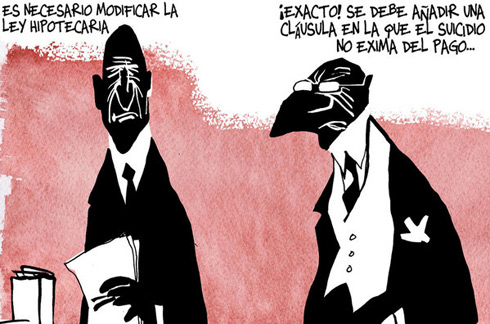 We need to change the law on mortgages.

Right! We must add a paragraph according to which suicide does not exempt anyone from the obligation to pay...

The Association of Spanish banks has announced a two-year moratorium on expulsion procedures for clients who can not pay their mortgage "in cases of extreme necessity." The move comes after a 53 year old woman from Barakaldo in the Basque country committed suicide as bailiffs came to seize her apartment.

Since 2007, nearly 400,000 people have lost their homes in Spain because they cannot pay the bills, in what has become a major social crisis.

You can unsubscribe anytime *
Categories
Migration and asylumSocietySpainSpain