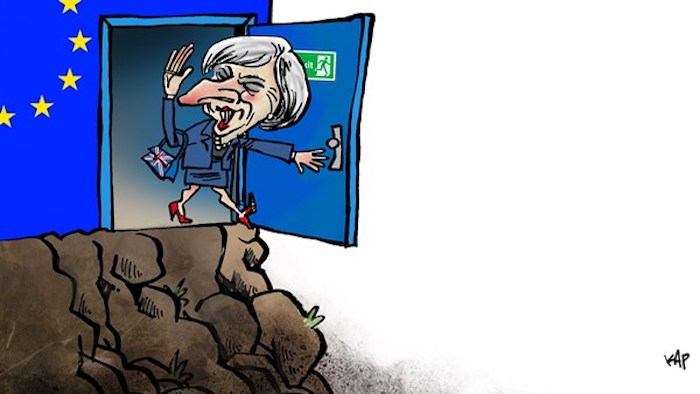 On 29 March British prime minister Theresa May sent sent Donald Tusk the letter informing the president of the European Council that her government was invoking article 50 of the Lisbon Treaty, triggering the process for Britain's withdrawal from the EU.

In her letter Ms. May mentioned "a deep and special partnership between the UK and the EU", but her European counterparts don't seem to be keen on making things easier for her government, say the press.

“It’s divorce after 60 years of marriage: four days after the festivities celebrating the 60th anniversary of the EU’s foundation, the UK has declared its exit from the Union,” observes Holger Steltzner of the Frankfurter Allgemeine Zeitung. The columnist is most worried about the future of his own country because, he thinks, the Brits’ departure could hit Germany hard:

As the second economic power after Germany, the UK is indispensable to the EU. From an economic perspective, the UK is as important to the EU as the 20 smallest members put together. It is as if, in one fell swoop, 20 of the 28 members were to leave the EU. Germany has a lot at stake. Not least because the other EU members think that Berlin, will pay [...] billions more to fill the hole that the UK will leave, as the bloc’s second biggest net contributor.

For El País' columnist Xavier Vidal-Folch, the letter addressed by the British prime minister Theresa May to the president of the European Council, Donald Tusk, applying article 50 of the Lisbon Treaty and beginning the UK’s departure from the European Union, “is of a high voltage cynicism couched in a refined diplomatic language.” For Vidal-Folch, who is highly critical of the form and content of the letter, the document can be summarised in four points:

a threat, with the UK conscious of its military force, nuclear capability and credibility of its intelligence services [...]. It is replacing the carrot with the stick; a blasphemy, because it wants to simultaneously apply the two steps inherent in the triggering of article 50, that of divorce and of the future relationship, simultaneously [...] which is in direct opposition to the wishes expressed by the 27; and a cynicism without equal [...] taking European immigrants as ‘human shields’ and political captives for other aims; fear and weakness, evident from [...] the manifold dangers of the UK’s territorial disintegration, its great internal weakness in this negotiation. […] Although courtesy is always preferable to outbursts, it is pathetic to treat an aggressive move for a divorce as if it were a pleasant marriage proposal.

“The negotiations on the British departure from the EU will inevitably affect the future of the EU. From this point, discussions will focus on the Union’s budgetary gap that the Brits will leave behind,” writes the Swedish daily. It notes Stefan Löfven, Sweden’s Social-Democrat prime minister, announced in a press conference on 27 March that Sweden wants the EU to reduce its expenditure by the same amount as the deficit left by the UK’s departure. Sydsvenskan adds that –

This is a logical starting point for Sweden, as a net contributor to the EU, but there could be significant resistance from countries that are dependent of other forms of support. A divorce is never easy and the EU without the UK will of course be different. Now we must make sure the Union changes in the best possible way.

the UK has made its first farewells to the European Union, which will weaken both parties. The divorce will be painful because the couple have children and a mortgage (i.e. citizens on both sides of the Channel and financial obligations) and do business together.” According to the columnist, the choice made by the British is not at all rational: “they are leaving the Union because they want to limit immigration. Because they have let themselves be seduced by romantic visions spread by the leaders of Brexit. Because they want to decide on their destiny alone. Because they have always viewed the continent suspiciously, despite Churchill’s speech on a United States of Europe. That is their right. But nine months after the referendum, they must realise the fact that the Union is not aiming to reach a compromise at any cost.

“For the UK, leaving Europe represents the most drastic leap in the dark – without a safety net,” notes Francesco Guerrera. The joint director of Politico Europe in London notes in La Stampa that –

without Europe, Theresa May and her team can hope to have the support of Donald Trump’s US, which at any rate hates NATO and doesn’t like providing aid for free. They may equally pray that the West’s numerous enemies – from Middle Eastern terrorists to Putin and North Korea – don’t think that an isolated UK isn’t as big as all that and that it could be vulnerable to attacks, pressure, intimidation. The international perception of the UK – and of May’s power in the negotiations – will depend on the health of its economy in the coming years. [...] The EU is certainly not the winner in this saga. The failure of political reforms, the sight of economic failings in countries like Greece and the spectre of immigration were crucial in prompting Brits to say ‘no’ to Europe. Without the UK, it will be more difficult to create a politico-economic bloc capable of standing up to the US and China. And the weak response coming from the Rome summit this weekend – a “multi-speed” Europe – is demoralising, depressing and defeatist. The Big Bang of Brexit is the start of a new era. Let’s hope the thunder of 29 March doesn’t signal a storm to come.