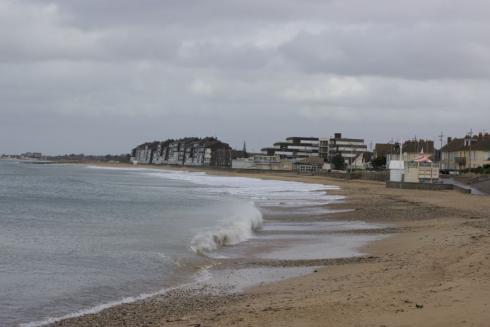 D-Day and the European Shoreline

Several months ahead of Friday’s commemorations of the 70th anniversary of D-Day, I was in the town of Courseulles-sur-Mer, the first French port liberated during the landings of 6 June 1944. Two workers were busy excavating a bunker that had once formed part of the Atlantic Wall the German army built in anticipation of an Allied attack. The concrete command bunker was not a recent discovery: the town knew where it was, but was content to let it remain buried. Immediately after the war, efforts were made to dynamite it, but the structure was too powerful, so it was left to be covered in sand.

Its excavation for this year’s visitors to Juno Beach speaks to the evolution of commemorations over the past seventy years. Courseulles-sur-Mer has become one of several towns along the Normandy coast to witness a growing influx of yearly visitors to numerous memorials, cemeteries and the beaches themselves. Since the 50th anniversary in 1994, every ten years has brought a new milestone ceremony larger than the ones that came before. For Friday’s official ceremonies around Normandy, French President François Hollande has invited 8000 guests, including 3000 veterans, and will be joined by heads of state and government including Angela Merkel, Queen Elizabeth II, Barack Obama and Vladimir Putin.

To a greater extent now than ever, the flourishing commemorations are marked by a growing influence of a civilian meaning and interpretation of D-Day. This interpretation has evolved differently at different levels. In the years that followed the War, the Occupation, the D-Day Invasion and the ensuing Battle of Normandy that raged through the summer of 1944 were traumas that many preferred to leave buried – but like the German bunker, their memories remained present. Stories of civilian life during the war rarely left the local level. The fact that living links are growing fewer – the youngest of those with any memory of that time are in their late 70s – has brought a greater urgency to listen to and record what civilian witnesses have to say.

If civilian memories of the war were vivid at the local level, they rarely entered wider, national narratives. Commemorations focussed primarily on honouring the brave fighting of veterans, although they were smaller-scale affairs than they are today. In the French case, Charles de Gaulle was reluctant to celebrate what he regarded as an Anglo-American military victory. To a greater extent, images of D-Day were long inflected by the Cold War: to appear strong before the Soviet Union, Western powers wanted to present a heroic image of the D-Day landing, thus constructing narratives that left little place for civilians living under aerial bombardments and fleeing to the countryside.

The end of the Cold War through the late 1980s and early 1990s brought an acceleration towards a less military and more civilian view. Which is not to say veterans have been brushed aside – if anything, their efforts are honoured on a wider scale than ever. But their efforts are understood less in terms of one army’s victory over another, and more in terms of securing freedom and democracy. Commemorations have come to be about the forces of good having won against Nazism, in a common triumph over racism, xenophobia and dictatorship. As the first step in opening the Western Front, a crucial point in turning the tide against Hitler, D-Day has taken on an identity as the first step in building a peaceful and united Europe.

This milestone ceremony may be the most civilian-focused to date, with many of its major events are conscious of providing a greater place for the people who lived through the Invasion. François Hollande will begin Friday’s commemorations at the memorial in Caen, where he will inaugurate a plaque dedicated to the civilian casualties of the Battle of Normandy (estimated between 15,000 and 39,000). The French presidential office says the inauguration marks the first time it has paid tribute to civilians.

The commemorations also come in the midst of a longer-term project to have the D-Day beaches listed as a Unesco World Heritage Site. Already in the works for several years, an application spearheaded by officials in Lower Normandy has gone to the French Ministry of Culture, which will decide whether to forward it to Unesco. As Unesco does not normally list sites of battles, the candidacy is oriented towards presenting the beaches as a universal symbol for peace. It is necessarily a notion of peace at the heart of European construction – one based upon reconciliation between nations and former belligerents.

At the 70th anniversary of D-Day, a civilian interpretation pervades at the local, regional, national, European and global levels. It has not always been that way, and different forces will continue to influence the Normandy shores. One of them is purely environmental: one much more practical reason for the Unesco bid is to preserve what remains of Mulberry Harbour, an artificial harbour built in the town of Arromanches over the two weeks that followed D-Day as a landing spot for Allied troops and supplies. Seven decades of tides and storms have taken their toll, and the remaining concrete blocks are under threat of being washed away. A Unesco listing would be one way of providing the means to preserve the harbour – if the bid is unsuccessful, officials will have to seek another.

The beach of Courseulles-sur-Mer in Lower Normandy, one of the landing points on D-Day.