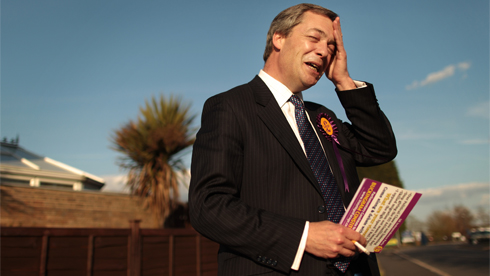 The comments of UK Independence Party leader Nigel Farage regarding the "influx" of foreign workers who would arrive in the Britain following the opening up of the UK labour market to Bulgarians and Romanians in 2014 has provoked angry reactions from Sofia. One young Edinburgh-educated Bulgarian woman wrote an open letter to the Eurosceptic MEP.

British MEP Nigel Farage on the campaign trail in Winslow, UK, in April 2010

I decided to write to you, because I was surprised by your comments [on Romanians and Bulgarians]. As a person who is Bulgarian, lived and studied in the UK and chose to go back to Bulgaria and build a career here instead of the UK, I wanted to take a stand on your statement regarding Bulgarian and Romanian immigrants and explain why I chose to go back to my home country.

Firstly, I would like to introduce myself and explain my reasoning behind this letter. When I was 18 years old and was finishing high-school, I decided to continue my education abroad and applied to several universities throughout the UK. I got offers from four universities, but finally decided to take upon the offer from the University of Edinburgh, studying a BSc (Hons) Mathematics and Business Studies at the School of Mathematics. It was a very proud moment for me and my family, as at it was, and still is, one of the most elite universities, ranked number 20 in the world at that time.

I lived in Edinburgh for four years and finished my studies successfully, gaining a 2:1. I can say that I was one of the active students and tried to get the best out of my time in university. I was participating in university societies and their committees, I volunteered in a charity, raising funds for cancer research; I also spent two months interning for a firm in London, and was later on offered a job position.

My strong connection to the UK is the reason why I decided to write this letter. Although I try and understand your immigration concerns, I must admit that I found your comments on Bulgaria untrue and somewhat insulting. In fact, they are only reaffirming my opinion of the wrong idea that people in the UK and around the world have about countries in Eastern Europe.

I want to clarify that I am far away from thinking that Bulgaria is doing as well as I hope it would be. I do not live in a bubble where I think that everything here is perfect – I understand our problems with our government, our law system, our education and healthcare systems. Living in the UK for so long only made me realise how much more we need to do, to learn and to grow to make our country better. Nevertheless, I have to disagree with some of the false information that you shared during your appearance on the show.

Firstly, the data that you stated on Bulgaria is untrue:

You said that almost 50 per cent of the people in Bulgaria live in poverty, however, the number is untrue; it is about 27 per cent, almost two times less.

I was very surprised to hear such false data as I was thinking that a politician such as yourself would take the time to check this information, as it is easily accessible online in English.

Nevertheless, I must say that not only the untrue data that you stated on national television bothered me. I believe that statements such as "If I was a Bulgarian, I would be packing my bags now, wanting to come to Britain" are bold and somewhat inappropriate. And since you were focusing on the problems in our country and why we would choose to come live in your country, let me tell you why I chose to "pack my bags, wanting to go back to Bulgaria".

Firstly, Bulgaria is a country with great potential. I am a firm believer that young people, who study abroad should come back to Bulgaria to pursue their career goals. Having a degree from a foreign university, I realised that my know-how would be much more needed here, than in the UK. After all, we are the future of our country and I believe that we are the ones who can bring this country forward.

In this respect, I would also add that my knowledge was much more valued in Bulgaria. One cannot deny that there is fierce competition in the UK labour market and it is incredibly hard, even for young people with good education, to get jobs which will allow them to be financially independent.

Furthermore, I believe that Bulgaria provides much more opportunity for businesses. When in university, I wrote my dissertation on family businesses in Bulgaria since the fall of communism in 1989. One of the conclusions from my research was that there was, and still is, great demand for the creation of small and medium enterprises in Bulgaria and one of the great benefits of doing this is the fact that we have the lowest flat tax of 10 per cent in Europe and only a 5 per cent dividend tax rate. Additionally, it is easy to quickly launch a nеw company in Bulgaria as the founding capital required is only €1.

I would like to say that with this letter I wanted not only to correct the false information that you stated on television; I also wanted to explain that not all Bulgarians and Romanians that come to the UK are "unskilled workers"; and even if they are, they also contribute to your economy.

I also wanted to take this opportunity to invite you to visit Bulgaria as a guest of me and my family, so that we can explain to you how much our country has changed over the past 20 years and see for yourself the potential that we have to grow even more in the future.

Finally, I want to clarify that this letter was written with good intentions. I hope that it sheds some light on the issues that you discussed regarding Bulgarian immigrants and I would be very thankful if I receive a reply from you.

‘Dear Brits, come see us instead’

The Internet has been buzzing with reaction in Romania and Bulgaria to comments by UK MEP Nigel Farage and to the British government's alleged intention to launch a campaign to dissuade Romanians and Bulgarians from coming to the United Kingdom once the restrictions on their UK working rights are lifted in January 2014.

In Bulgaria, a "Not OK for the UK" collective has been launched, complete with Facebook page, which responds to British clichés about Bulgarians. Meanwhile, in Bucharest, the daily Gândul has adopted the British Tourist Office slogan - "Why don't you come over?" - but is applying it to Romania instead.