Report Slovakia
"He’s not a neo-Nazi." "It's just an ordinary voter, long-frustrated because nobody cares about his problems." 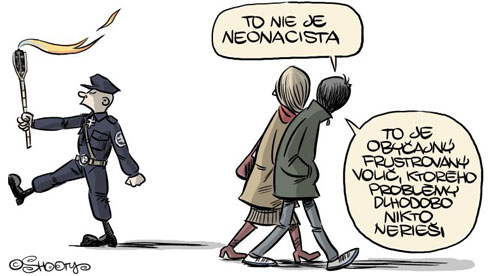 Democracy tested by a little Führer

The election of neo-nazi Marian Kotleba as a regional governor last weekend is the latest example of the far-right surge in Europe. Will the Slovak political elite and civil society, who allowed the rise of this outsider, be up to confronting the situation ?

"He’s not a neo-Nazi." "It's just an ordinary voter, long-frustrated because nobody cares about his problems."

During a recent public holiday, Poland's ultra-nationalist radicals burned a sculpture of a rainbow on a square in the centre of Warsaw and went on to torch a guard hut at the Russian Embassy. It turned into an international scandal. The Polish ultra-nationalists’ Slovak colleague Marian Kotleba has got further. Over the weekend, he won the regional elections and became Župan (Region Administrator) of the Banská Bystrica region. It came as a shock to the Slovaks.

Voted in as head of one of the country's eight regions is a man who has praised the fascist Slovak state and the expulsion of the Jews, who likes to be called “Vůdce” (Leader), who is creating a militia against the Roma, and who leads a party, “Our Slovakia”, whose programme could be summed up as "populist improvisation with elements of neo-nazism."

After Jobbik entered the Hungarian Parliament in 2010, it is no longer surprising that frustration and disappointment with political and economic developments in central Europe have led to gains at the polls for an extremist politician and his party. Mutual recriminations among Slovak politicians on both left and right after the fashion of "It’s your doing, not mine," suggest, however, that the politicians have failed to grasp the change in the mindset of the population.

[[Kotleba’s participation in the second round mobilised more voters to show up than in the other four regions, where the vote was held on Saturday. And his votes came from more than just one social class]].

Kotleba’s electoral win will obviously steer him next year towards the presidential election and local elections. Although he has no chance of winning, the groundwork is being laid for the parliamentary elections of 2016. As the administrator of the region, he will be isolated; all the greater, however, will be the opportunity to cast himself as a victim of the system and score points, believes for example sociologist Martin Bútora.

Frustration and the Slovak state

Kotleba’s success has several levels to it and is the outcome of several factors that not all Slovaks are susceptible to. Overall dissatisfaction with the development of Slovak society in recent years is one of those causes.

Another is the failure of left-wing and right-wing elites, which were unable to put up any opposition to Kotleba, who surprised everyone by advancing to the second round.

Prime Minister Robert Fico supported his Smer party's candidates in the Nitra and Trnava regions against the (alleged) Hungarian danger, but had no time to spare for his party’s candidate in Banská Bystrica. As for the conservative right-wing parties, their candidate absolutely refused to support Smer’s candidate in the second round.

The third factor is long-term and rather subliminal. According to sociologist Michal Vašečka, there is a relatively large group of voters in Slovak society with an authoritarian bent (as shown by earlier successes of the Slovak National Party and Mečiar’s HZDS). This group is also willing to question the outcome of the Second World War, in the sense that they question the complicity of the leader of the wartime Slovak state, Jozef Tiso, in the Holocaust and other crimes. Since the mid-1990s, according to the Vašečka, this seam of opinion is growing stronger, and thanks to the influence of the Catholic Church.

Although in the European context we must see Marian Kotleba’s win as one in a series showing that support for extremists is growing, [[his win goes beyond being a mere protest vote also because this totally unpredictable radical combines his populism with the sensitive and continually unresolved question of the Roma]].

Unofficially, Roma make up about a tenth of the Slovak population. The majority of Slovaks perceive the Roma problem primarily as a question of security, and not of human or social rights. And that plays into the hands of Kotleba, who for example, bought the land on which one of the many Roma settlements sits, and now wants to expel the people from that settlement – that is, he wants to use force as a solution.

Rather than the traditional Hungarian card, the dusted-off Gipsy card has pushed Slovak politics into the extremist corner. The response from the politicians of the traditional parties reveals that they have been outflanked and that Kotleba’s success is something outside the pale of current political developments.

Those developments in post-1989 Slovakia have not been completely benign to liberal democracy and its fundamental values. But even Ján Slota, notorious former head of the Slovak National Party, never declared himself a partisan of Nazism and its Slovak relative so openly as Kotleba has. "It's more serious than it seems," says Bútora.

Region administrator as a litmus test

In a publication of the Bratislava Institute for Public Issues, “Where from and where to: 20 years of autonomy”, former Government Plenipotentiary for Roma Issues Klára Orgovánová claims that when it comes to assessing how Slovaks are faring at building a civil society, Roma are the litmus test.

As such, Marian Kotleba, so closely associated with the Roma issue, will be a test of Slovak politics as a whole.

With his election to the post of Region Administrator, Slovakia seems to have taken a step backwards. However, this is far from being true. Only the response to and the way that the politicians deal with the reality that this democratic vote has brought about in Slovakia will show us the true status of the Slovak (civil) society and the quality of its democracy and its institutions.

In other words, they may increase his popularity by treating him like a pariah. Or they may cleverly discredit him as a politician in his role of region Governor. The chances of the second thing happening, though, are rather slim at this moment.

The parties refuse any responsibility

“The elections have not troubled the parties,”remarks SME following the surprise election of long-standing far-right activist Marian Kotleba to the post of governor of the Banská Bystrica region.

Kotleba’s success in a stronghold of the socialist Smer party was largely facilitated by a decision on the part of the candidate for the conservative SDKÚ, who was defeated in the first round, not to voice support for SMER. But both parties refuse to accept any responsiblity, concludes the daily, which points out that —

… an absence of self criticism is one of the worst characteristics of politicians […] and one of the main reasons why voters have not only set aside any trust in them — a change that is partially justified – but also in democracy itself, which is quite foolish.