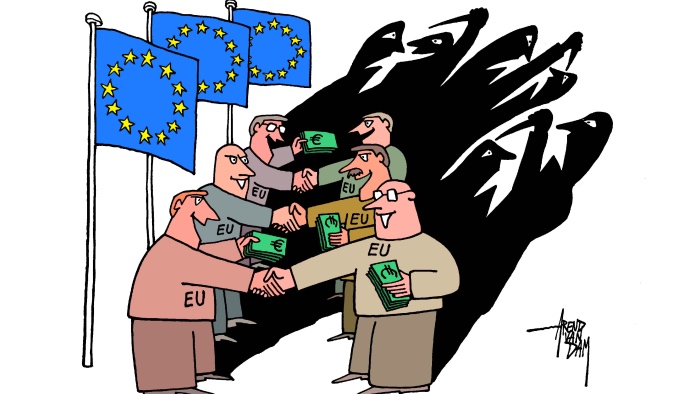 An unintended consequence of Brexit is that the Nordic country has lost its major ally within the EU, making it harder for it to counter the Franco-German call for a budget increase.

The European Union embarked on a struggle historically fraught with difficulties with the high-level summit to launch agreement on the EU’s multi-annual budget in Brussels last week (23 February). This year’s task is amplified by the challenge of how the 27 remaining member states will allocate the budget upon Brexit treading into effect.

Denmark belongs to the handful of countries refusing to contribute more to the EU budget in the wake of Brexit – a group that also includes Austria, the Netherlands and Sweden.

The EU budget is being shorn of between €13-14 billion annually due to Brexit, according to the European Commission (EC). This means a void in funding for newer initiatives targeted by the bloc, such as border protection, migration, third-country refugees, terrorism, security and increased spending on EU defence.

“Most countries are prepared to pay more towards the budget. But, on the other hand, the few countries opposed to doing so are more determined in their opposition than ever before,” a high-ranking EU source told Denmark’s TV2 news channel.

The budget, known as the Multiannual Financial Framework (MFF), spans seven years, from 2021 to 2027. The EC has sent up a trial balloon to raise the budget from 1 percent of GNI (the bloc’s Gross National Income) to between 1.1 and 1.2 per cent. The EC will submit its concrete proposal in May, but so far the emerging plan indicates filling half of the Brexit budgetary gap through savings, and supplementing the other half through increased funding. Each half would amount to around €6-7 billion in savings, with the same in increased payments from member states.

The EC believes the vast majority of costs (80 per cent) for its new initiatives, such as tackling terrorism, will require the infusion of new funding, while savings elsewhere will account for the other 20 per cent. While figures are unavailable for what many of the initiatives will respectively cost, Budget Commissioner Günther Oettinger puts the total in the ballpark of €10 billion annually.

As far as savings, the EC has opted to protect the Erasmus+ training programme and research and innovation in the Horizon 2020 programme from cuts. Where to do the cutting, however, is a point of contention between member states.

“As the EU becomes smaller, so too does our budget,” Danish Finance Minister of the ruling Venstre liberal party Kristian Jensen stated at a meeting of EU Finance Ministers in Brussels on 20 February. “The principle we have to adhere to is the spending framework of 1 percent of GNI.”

That position is immutable, Danish Prime Minister Lars Løkke Rasmussen reiterated prior to Friday’s summit to the Danish political magazine Altinget. Denmark, which has traditionally considered the UK its greatest ally within the EU, must find new ways to maintain its relevance in a future dominated by French and German plans for ever-closer union, Rasmussen says.

On the other hand, “Great Britain is still an important country, but nothing resembling what it once was,” he told Altinget’s Thomas Lauritzsen. “So Europe is the future. And that Europe is the future for Denmark is incontrovertible. But it’s just as clear that we will lose an ally in some important negotiations… for now it’s as if the balance [on European integration] has been upset.”

Domestically, the EC proposal to raise the GNI spending cap to as much as 1.2 per cent would “correspond to Denmark suddenly increasing public spending by 20 per cent. No responsible Prime Minister in any country would go there,” Rasmussen told Kristeligt Dagblad, another daily. “At its core, the point is that Brussels should have to take the same medicine as we do back home. We must prioritise our own budgets.”

Another point of contention for Rasmussen is the European Parliament’s Spitzenkandidat procedure, a quasi-automatic mechanism for selecting the Commission’s next president as a means, he suggests, for larger countries to dominate their allocation. The concern is that a capable candidate from a small country like Denmark won’t be competitive in an electoral system designed to preserve the patrimony of larger EU countries.

European Commissioner for Competition and former leader of the Danish Social Liberal Party (Det Radikale Venstre) Margrethe Vestager has been touted as a possible successor to Jean-Claude Juncker due to her well-received anti-trust work on U.S. big tech corporations, for example.

This, however, may not even be Rasmussen’s prime motivation, considering that he will be able to appoint a new commissioner from his own party (Venstre) if he holds on to power in the next general election in Denmark, likely due within the next year.

Battles of the Bulge

Denmark’s budget battle is also a balancing act by the ruling government to retain a greater voice in EU affairs while being able to continue to sell the European project to a Euroskeptic electorate domestically, an attitude spearheaded by the Danish People’s Party (Dansk Folkeparti), which nominally supports the coalition led by Rasmussen.

Simultaneously, “Denmark’s relative negotiating strength has been weakened… when the UK is no longer there to lead the way on opposing payments to the European budget [and] since countries like Germany and France have cautiously moved towards making higher contributions,” a Brussels official told TV2’s Lotte Mejlhede.

The MFF negotiations will be characterised by the difficulties involved in determining who should pay towards what and where cuts should be made, something potentially harder for a smaller country like Denmark to maintain a consistent attitude towards following EU plans to abolish DK rebates in the wake of Brexit (although this could prove to be a net positive for Denmark, as it contributes more to Europe-wide rebates than it receives).

For example, France traditionally receives a large share of agricultural support, whereas some Eastern European countries, such as Poland and Romania, receive a share of the EU’s structural funding, which aims to raise the poorer and less well-developed EU countries to the European median norm. Eight CEE countries recently pledged their support for the EC proposal to raise the budget cap. Denmark, along with Austria, the Netherlands and Sweden as net contributors, see no need to increase their contributions.

Tradition suggests sentiments on the budget will keep boiling for a long time. The previous multi-annual budget took 29 months to agree upon. The objective is to achieve the current one by May 2019.

The budget must be adopted unanimously by EU member states.