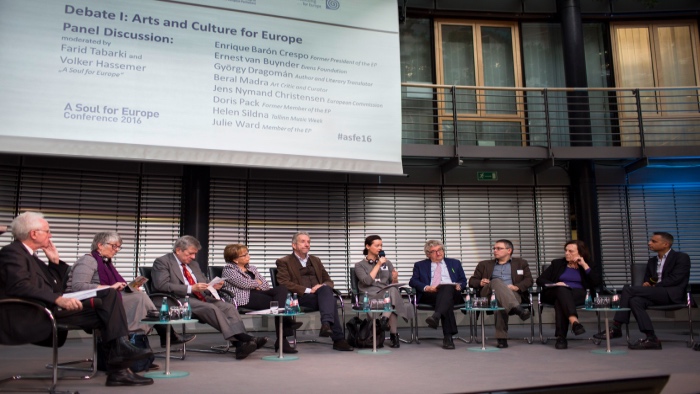 Desperately seeking a soul for Europe

What a fitting headline for the times – Europe and the European project face many threats, such as the unresolved Euro crisis, desertions such as Brexit, disagreements over international issues like the one that the signature of the free trade agreement with Canada brought to the fore after much wrangling, and last but not least, the (victory) of Donald Trump in the American presidential election and his intention to revisit transatlantic relations. These uncertainties that taken together force us to ponder the relevance of the European project, how it is perceived, and how to address these threats.

Such was the objective of the conference A Soul for Europe that was jointly held in Berlin this past 8 and 9 November by the Allianz Foundation and the Berlin Zukunft Foundation. Political leaders, members of civil society, journalists and experts met there to discuss the European project and along what lines to relaunch it. On day one, the sole topic was the role of cities, which play a key role in the construction of Europe. On day two, there were three topics: culture as an integration factor, immigration and its impact on the construction of Europe, and the construction of the Europe of citizens based on the first two topics. According to participants like Ivan Krastev and Ulrike Guerot, citizen participation is crucial to building a European demos and reenergizing the European project. To achieve these goals, institutions to bolster participation are needed. Bloggers such as Jon Worth also hold this opinion.

Several projects designed to address these points were presented at the venue Marketplace Europe, such as vonkiezzukiez.eu (“Neighbourhood to neighbourhood"), which aims to communicate on the topic of the issues in European neighbourhoods and cities by collective discussions between citizens and representatives of institutions. The objective of the project called Migration Matters is to demonstrate through thorough studies the truth about migration to the public. European Alternatives, is striving to l'"create a transnational political space that enables citizens to take decisions."

The President of the European Commission, Jean-Claude Juncker, delivered the closing speech, which was on the state of Europe, and sponsored by the Konrad Adenauer Foundation. Juncker, who seemed more humane up close than one would guess from his public persona reflected by the press, stressed one fundamental point for all who are involved in or affected by the European project: "Often I see it written that the European Union is the main problem of the European continent. To the contrary, it is the only way that Europe will manage to survive in tomorrow's."

Translated from the French by Rita Smith-Lemaire