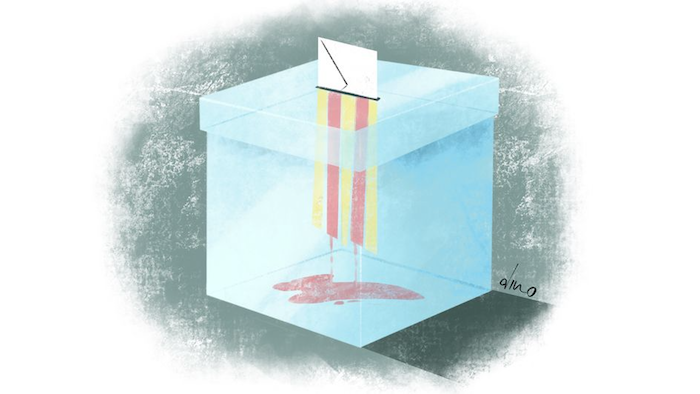 The antagonism between Madrid and the nationalist regional government of Catalonia, which gave way to violence during the October 1st independence referendum, has lead to a situation with no winners, and much less hope for a political solution to the Catalan question.

The trap has shut. With the arrogance and pride of a politician blinded by cynicism and the delusional belief that legitimacy can be achieved through force, Mariano Rajoy has been lured to exactly where the Catalan nationalists want him: engaging in the unacceptable violence and brutality of police repression.

Rajoy wanted to flex his muscles. Yet all that he’s achieved is to recall the shadow of dictatorship, the wounds of the past that Catalan nationalists thrive on. Columnists are already opinionating about how the country’s ruling right wing is the offspring of dictatorship. In fact, the Spain of 2017, even when it deploys the police in an utterly scandalous manner against Catalan voters, is not an authoritarian regime, and has nothing to do with the tragic memory of Franco’s rule. But the damage is done.

The seeds of discontent have been sewn. From now on it will be much more difficult to find a political solution, to de-escalate. When blood is spilled, the negotiators’ ink dries out. The nationalists, both Catalan and Spanish, have won, and Europeans have lost. They lost when they started becoming more and more sympathetic to Barcelona’s claims. Not that those claims were illegitimate. Catalan autonomists want more fiscal, cultural and administrative freedom. They ask for the same rights and status that the Basque Country gained in exchange for peace after years of terrorism.

In 2006 the socialist government of José Luis Zapatero in fact granted those rights to Catalonia. Then in 2010, and undoubtedly for political reasons, his successor, the conservative Mariano Rajoy, brought that decision into question, leading to major revisions in the Constitutional Court. Things quickly precipitated, and the opposing camps became increasingly irreconcilable. The autonomists should have stopped there. Logically, they should have kept fighting for political solutions, returning again and again, like Sisyphus, to ensure the possibility that another government, at the national level, might enact the agreements signed during Zapatero’s leadership.

This, precisely, is the treasured opportunity that every democracy offers: to be able to keep putting propositions on the table in order to obtain, however slowly, progress or compromise. Instead of this, the Catalan autonomists preferred a headlong rush, escalation, the provocations of Carles Puigdemont. Independence has replaced autonomy at precisely the point in time when nearly everywhere in the world the effects of globalisation and the calling into question of former certitudes are pushing citizens to look for scapegoats and political, identitarian escape routes. But Catalan nationalism, they say, is neither anti-EU, nor anti-immigrant.

This is indeed true. The new sorcerer’s apprentices of regionalism act, so they say, in virtue of their Europeanism, and promise that their secession is friendly, peaceful, progressive, open, and fits with the values of the European Union. In reality, however, they have betrayed European values. They have blown on the embers of resentment. They have resurrected the memory of a Catalonia once subjugated by the Bourbons, then martyred by the Francoists. Think, for example, about how on certain nights a group of Barça supporters rise 17 minutes and 14 seconds into the game to chant "Independencia !" in memory of the fall of Barcelona in 1714, when it was conquered by Philip V. Of course, no one can or should deny that Catalonia was one of the principal bastions of resistance to Franco.

But in 2017, to instrumentalise this memory constitutes a rupture, a violation of the founding pact of a united Europe. Not just because accession to Europe implies in principle a kind of solidarity between regions and citizens - instead of regional economic egoism - but above all because the supporters of independence have put to work the poison of division, of revenge, of resentment, which so often leads to pure hatred. Is there a single regional claim that merits risking the peace of a territory which has only recently rediscovered democracy and freedom of opinion, of culture, of speech, of protest, after a vicious civil war and thirty-six years of sordid dictatorship?

“The essence of a nation is that all the people have many things in common, but also that they have all forgotten many things too”, suggests Ernest Renan. This, in fact, is one of the founding principles of a post-war Europe built upon the ruins of totalitarianism: to remember the crimes, of course, but also to remember how they were overcome. To preserve the memory of tragedies, but also the path towards reconciliation. Carles Puigdemont has chosen the way of confrontation. Mariano Rajoy, that of repression. It would be a mistake for Europeans to choose a side, to excuse the actions of one by the intransigence of the other. There is no winner here, only the defeated.