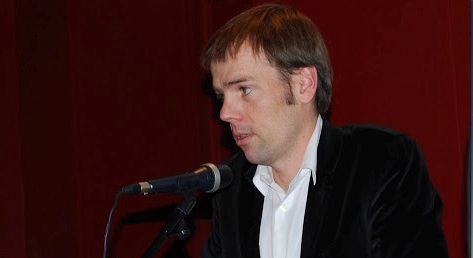 ‘Don’t be afraid of counter-democracy’

Luuk van Middelaar is what is called an engaged observer. Philosopher and historian, he is the author of one of the most exciting books on European Union in recent years, Le Passage à l'Europe, Histoire d’un commencement (The Transition to Europe: Story of a beginning), which earned him several awards, including the European Book Prize in 2012. Since 2009, though, as one of the advisers – and “pen” – of European Council President Herman Van Rompuy, this 39-year old Dutchman has also been at the heart of the system that he dissects.

In Paris for a conference at the House of Europe, Luuk van Middelaar uses this dual viewpoint to put in perspective the crisis and the changes that the Union is going through. Firstly, the union is now split between the countries with the euro and the countries without it, he says. On the other hand, “Europe has two hearts: the common market, and the euro, which is a transfer of sovereignty that is both immense and underestimated. The states are drawing the conclusions today, and sometimes it is very painful”.

In fact, notes the historian, “European policy is turning ever more inward.” But this evolution cannot proceed merely through a balance being achieved between Brussels and the national governments. The EU “needs democratic legitimacy at both the national and European levels”. From this point of view, Luuk van Middelaar believes –

The European public is like the choir, which looks down on the scene but also takes part in it and comments on it. It becomes an actor when it votes, but also when it comes out in the street to express its displeasure. The European public is seeking ways to act. Increasingly, national elections are about Europe. In the Italian elections, the debate has been to define Italy’s relationship with Europe. How the Italians voted was an action, a message. "Do not be afraid of what Pierre Rosanvallon termed ‘the counter-democracy.’"

The European elections of 2014 will therefore be crucial. While many argue, though, that the president of the next European Commission will be appointed from among the ranks of the political grouping that emerges from the election, Luuk van Middelaar observes that –

this politicisation, which can strengthen the Commission, can also harm its neutrality in its role as guardian of the treaties. The Commission has some new functions (monitoring national budgets, in particular), which require it to be neutral. This brings up the question of the public and its disappointment, because the Commission will have neither the powers nor the means to shake up the system. More generally, this raises the problem of the Executive power: who can make the decisions for all of the club's member states? I am against good ideas that turn out to be mistaken, and one of them is direct elections for the president of the European Commission.

After this conference, we continued the discussion with Luuk van Middelaar in a brasserie in the Marais, in the company of the team from European thinktank La Maison de l'Europe (House of Europe). On the menu: pot au feu, veal kidneys and the crisis afflicting the sense of "Europeanness" – what the philosopher, historian and political adviser called the "quest for the public". “When we started to build Europe, the word ‘European’ began to lose its substance,” he says, adding –

No one spoke about us any longer as Europeans, because the world of the Cold War was divided into three: West, East and the Third World. The word ‘European’ took on an ideological meaning. ‘The Europeans’ became the builders of Europe, those of the inner sphere [defined in his book as the Community institutions] rather than the outer sphere [that of the European continent as a whole]. This began to change with 1989 and the reunification of Europe, a historical shift, and with actions like flying the European flag or the Erasmus programme. In a certain way, we’re still unable to see ourselves as Europeans, unless we go somewhere else in the world. But even if the crisis is creating new tensions between peoples, these tensions arise from being European.

This crisis, and these tensions, as we know, have been testing the institutions and governance of the EU for the past three years. How does the author of the Transition to Europe, written in 2009, analyse this evolution?

The decision-making process is the same. The European Council continues to take on the exceptional cases. The difference is that this is stretching into the long term. However, there is a more profound shift underway. The Greek crisis has tested the Community method, in the sense that the Union is now searching for another kind of decision-making. Time is too short to be able to call for a White Paper on the sustainability of public finances. We have to work outside the rules, at least at first, and then to absorb the shock, for example by integrating institutions. The result of the decisions of the heads of state and government is that the European Commission has more power than ever, for supervision, recommendation and implementation. The European Council remains involved as a place where different national policies can be coordinated. After the crisis, there are two hypotheses for what will happen: either we go back to what we had before, with the Council taking a back seat, or we realise that something has changed. No doubt, we will not escape a stronger coordination of economic policies.

Would the 27 have handled the crisis differently without Herman Van Rompuy, the president of the European Council, the Luuk van Middelaar's boss? “We would have had the rotating Presidency of the Council,” van Middelaar answers, without going on to clarify that, apart from Poland, no major country has chaired the Council – only Ireland and Cyprus, which have been weakened, and Hungary, which has been largely discredited. “The Lisbon Treaty [establishing the post of president of the Council] entered into force just when the crisis erupted. The crisis and this change have played a role.” It’s difficult, therefore, to assess the contribution of Van Rompuy openly.

And, looking at his own work, what lesson has the philosopher learned from his experience? “When I wrote Transition to Europe I thought the decisive events would come from outside the EU, not inside. But they confirm my analyses of the event-driven nature of European policy. Policy is something felt in the present, but also the future.