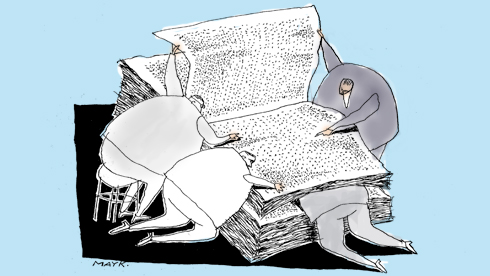 Do’s and don’ts for the EU

Brussels’s eagerness to regulate anything and everything has long been a bone of contention for eurosceptics, especially in Great Britain. Today, however, the trend in the EU is for “lighter” regulation, points out an influential Polish daily.

“The EU wants to regulate our toilets!” The British press cried havoc when it got wind of the European Commission’s plans to regulate the size of toilet cisterns across the continent. And though the news proved misleading – since Brussels does not intend to impose anything, but has only established ecological criteria for flushing toilets and urinals – the storm has continued.

“There seems to be no limit whatsoever to the Commission’s self-conferred licence to interfere,” said Martin Callanan, the leader of the Conservative group in the European Parliament and Tory spokesman on EU environment measures.

The conclusion that the optimal flush should be five litres for toilets and one litre for urinals had been preceded by a two-year long study that cost some €89,000, which even researched such details as the popularity of urinals across the EU. The “flushing” study is also a storehouse of knowledge for cultural anthropologists: it turns out that Germany, the EU’s largest country in terms of population, ranks only third in terms of water consumption, after Britain and Italy. Poland, only slightly less populous than Spain, uses three times less water, the study found.

The Brussels-commissioned report could easily be pooh-poohed as another example of red tape and a bureaucratic approach to reality, but the temptation to jump to conclusions was checked by the EU environment commissioner Janez Potočnik’s spokesperson who remarked that “if 10 per cent of all toilets in the EU were ecolabelled, households across the union could save nearly €390m.”

The EU introduced the ecolabel standard in the early 1990s to help consumers choose greener products, starting with low-energy consumption domestic appliances, and has generally been praised for the initiative. But the move to ecolabel flushing cisterns has encountered a vehement reaction from eurosceptics.

Of course, there is no doubt that Commission’s regulating ambitions have often gone too far. [[Standards for fruit and vegetables, including the famous curvature criteria for cucumbers or bananas, were scrapped back in 2009]]. In May of this year, the Commission dropped a proposed regulation banning the restaurant practice of serving olive oil in refillable decanters. Though the idea that it should only be served from pre-packaged factory bottles to avoid non-compliant products had been proposed in the first place by the EU’s major olive oil-producing countries (and supported by Poland in the preliminary vote), it was the agriculture commissioner, Dacian Cioloş, who received most of the flack.

“Not everything needs a solution at European level. Europe must focus on where it can add most value. Where this is not the case, it should not meddle. The EU needs to be big on big things and smaller on smaller things — something we may occasionally have neglected in the past” admitted Commission President José Manuel Barroso in his State of the Union address in September 2013 – and the Tories were quick to remind him of that when the toilet-flushing report was published.

Last month, Brussels initiated a regulatory review REFIT to reduce red tape by scrapping little-needed regulations and simplifying others. This “regulatory fitness” has now become one of the priorities for PM David Cameron, who has promised to hold a referendum on British membership in the EU by 2017. Mr Cameron, convinced that the UK should remain part of the EU, is now trying to find arguments to persuade the British public that the EU has indeed changed. An earlier idea was to loosen the terms of the British membership on the occasion of a renegotiation of the EU treaties – suggested every now and then by Berlin – but this is unlikely to happen any time soon. This leaves “regulatory fitness” as the only viable short-term objective.

During the October EU summit in Brussels, Polish PM Donald Tusk attended a narrow-circle meeting that Mr Cameron organized as part of patching together a “red tape-cutting coalition.” The matter is serious because it is by no means confined to the curvature of cucumbers. Among the 30 recommendations contained in a report compiled by the British government’s business task force, which the cabinet has endorsed, is also an abstention from new legislation on shale gas. Warsaw has been concerned that such new legislation would greatly diminish the profitability of shale gas extraction, discouraging investors from tapping Poland’s rich reserves of this valuable energy source.

Will Brussels listen? The Commission remains seriously divided on the issue, but the decision on shale gas regulation is expected as early as December.