Ideas Hungary and Poland
People protest against the so called "Lex-CEU" in Budapest, on 9 April 2017. 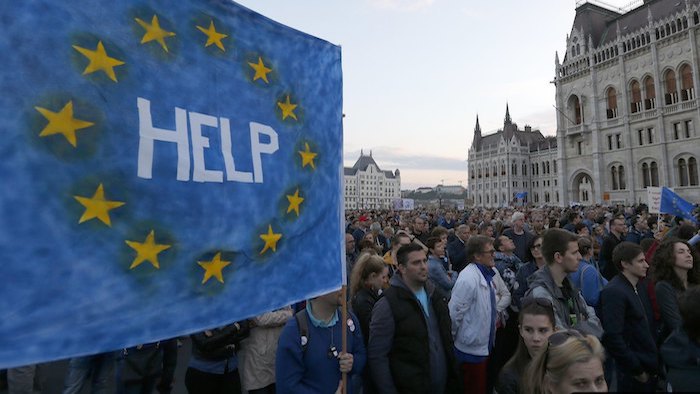 After a successful transition from communism to democracy, Hungary and Poland are slowly drifting towards a Russian-style authoritarian new type of regime, and away from European core values. A trend that is affecting the whole region.

TRT World and Agencies  | People protest against the so called "Lex-CEU" in Budapest, on 9 April 2017.

The new Hungarian law signed on 10 April by President János Áder has been branded Lex-CEU. This new legislation allowing the government to expel the Central European University (CEU) from Hungary is like an X-ray image of a hybrid regime – a democracy drifting towards authoritarianism. Moreover, it is not an isolated case but already a regional trend.
The alarming Nations in Transit 2017 report by Freedom House found that, with regards to democratic institutions and values, more countries were on the decline rather than an upswing.
At the end of the day, it is not so new to observe a democratic decline. But it is surprising to find that the most prominent success stories of the democratic transition – Hungary and Poland – are turning their back on their past achievements and moving towards a hybrid regime.

CEU is perhaps the only university in the region highly ranked in numerous world and European university reviews. It was founded by George Soros who registered it in New York and first accredited it in Prague in 1991, and shortly after, moved the institution to Hungary.
It appears Hungarian Prime Minister Viktor Orbán was not joking when he described 2017 as “the year of repulsing” George Soros. Besides “sweeping clean” many civil society organisations receiving funding from the Open Society Institute, he has started to make it impossible for CEU, labelled as “Soros University”, to operate in Hungary.
Dozens of Nobel-prize winners, hundreds of research institutes and even the German president decided to speak out against Lex-CEU. Yet, the law was adopted just five days after initiating the legislative proposal – only one amendment was attached which allowed for a special arrangement for the CEU providing it is agreed upon by both hosting governments, the USA and Hungary.
Attacking one of the best higher education institutions in Central Europe carries more significance than the fact of the attack itself; it is a real portrait of the nature of a hybrid regime that tolerates less and less open debate and free inquiry.

It might have been just a coincidence that just a week prior to Lex-CEU Russia revoked the license of the European University at St. Petersburg. Perhaps it is also a fluke that, parallel to the Lex-CEU, Hungary has also drafted a “foreign agent law” which strongly resembles another of Mr. Putin’s pieces of legislation.
This new law labels NGOs – receiving non-domestic financial support over HUF 7.2 million (approximately EUR 24,000) – as a national security threat and forces them to register themselves with the authorities.
This is not only about Mr. Orbán willingly copying Mr. Putin’s political methods. It is about eroding the system of checks and balances, restricting horizontal accountability and strengthening corruption. Moreover, the two systems promote a similar anti-Western revisionist ideology that fosters resentment for loss of a supposedly glorious past (Imperial Russia or “great Hungary” from before the 2nd world war). Yet, contrary to Russia, Hungary is in the middle of the Western democratic family – member both of EU and NATO.

Viktor Orbán’s post-2010 regime can be categorised into the group of so-called hybrid regimes where leaders do not completely dissolve democratic institutions and the rule of law, but they strive to empty them of content and restrict their operation.
Democratic institutions do exist in Hungary, but they barely work. Their role as a check on those in power has been gradually restricted since 2010. The National Assembly operates as a government-dominated law factory and the national government has either weakened autonomy or taken control of every institution that could in some way keep its power in check. Parallel to this process, the government restricted journalists’ freedom.

On a crash course with Europe

The goal of the Fidesz government is to eliminate any existing checks on its power with the continuous restriction of democracy. The hybrid regime in Hungary can be categorised as a kind of competitive authoritarianism that was researched by Steven Levitsky and Lucan A. Way, which only maintains the illusion of democratic competition.
In theory, the EU could intervene by launching rule of law mechanisms, but facing tough Brexit negotiations, Brussels has never been so cautious with ‘enfant terrible’ countries. Moreover, this procedure is not appropriate for effective intervention, just like we have seen it in the case of Poland.
So maybe it is time for the European People’s party to finally push Fidesz into a moral quarantine by excluding it from the caucus. Otherwise, tolerating a hybrid regime could lead to an even more dangerous precedent in the CEE region that is already overshadowed by backsliding democracies.