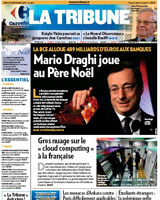 ECB brings some relief to the banks

“Mario Draghi dresses up as Santa Claus,” writes La Tribune. On December 21 the President of the European Central Bank (ECB) made available a line of credit of over 489 billion euros over three years to help out 523 European banks. Announced in early December and called a “low-calibre bazooka,” this unprecedented operation aims to “ensure the liquidity of the banks that are responsible for 75 percent of the financing of the eurozone economy,” the French business daily explains. The move is meant to reduce the impact of the recession expected in 2012.

The action of the ECB is directed primarily at the banks. It is not a direct response to the question of sovereign debts. These funds are intended to protect European economies from a “credit crunch” and are a response to the reality that banks at the moment are hardly lending to each other. At the same time, it allows financial institutions to continue supporting the economy without taking major risks on their liquidity ratio. Despite the incentives of the ECB, it's highly improbable that banks will use the funds to buy sovereign debt. If they do buy the debt, it will probably be in homeopathic doses, and according to the “each to his own” principle... The problem of financing the eurozone states remains unresolved. [...] Bringing in the ECB as lender of last resort for the banks is likely to calm concerns temporarily. The respite will be short-lived, however, as the uncertainty over the financing of state debts remains.

It’s an opinion shared by Corriere della Sera, which holds that “the operation of the ECB will not be a panacea, neither for the businesses nor the Treasuries, nor for banks – at least in Italy.” Italian banks do not have, in fact, capital reserves sufficient both to cover new loans and to purchase Italian debt securities.

“The ECB is putting up half a billion euros”, writes a delighted Die Welt, noting that “even the experts are astounded by such a huge demand” from the banks.

According to Germany’s private banks, the three-year credit is a quantum leap that decisively improves the liquidity supply in Europe and relieves the banks in a difficult phase of refinancing. Along with the other measures to ease liquidity that were decided on in early December by the ECB [such as lowering interest rates to one percent], the moves are important steps in the right direction towards confronting the danger of a credit shortage in the euro zone.