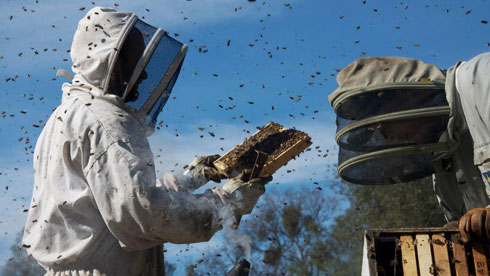 A category of insecticides, widely used throughout the agricultural sector, may be responsible for Europe’s high level of bee mortality. The European Commission wants to ban their use, but manufacturers are throwing a spanner in the works.

The buzz about the bees is getting louder all the time. Colonies are being wiped out and people want to know who’s to blame with the spotlight having now fallen on neonicotinoids, a group of insecticides. It all started with a report by the European Food Safety Authority, EFSA. Although the report does not state that these pesticides are the cause of the bee mortality, it does conclude that there are huge inherent risks.

This immediately resulted in neonics being placed on the European agenda. The European Commissioner for Health and Consumer Policy, Tonio Borg, from Malta, made a proposal at the end of January for a ban on the use of three important neonicotinoids (imidacloprid, thiamethoxam and chlotianidin), used particularly in the cultivation of maize, cotton, sunflower and rape seed. The intention was for the ban to become applicable as of July 1, 2013 and the effect was to be evaluated after two years. The permanent committee of experts from the Member States was going to review the dossier on February 25. However, the meeting was postponed until mid-March.

Rumour has it that the industry is preparing legal proceedings and claims for damage. Neither Borg's department, nor manufacturer Syngenta are willing to respond. Apparently, the proposal has now been changed and its scope extended to include fruit cultivation.

The Commission sent the permanent committee a letter which contains an unusual section stating that the draft text is to be submitted to the producers. Their responses are expected before March 1. At the same time, the letter states “that there are indications that the products no longer meet the criteria of the previous approval.”

It would appear that the Commission wants to cover itself against any legal proceedings. After all, the manufacturers, which are big players such as Bayer and Syngenta, are not going to stand aside just like that, without putting up a fight. Full-page adverts have been placed in newspapers and letters have been written to national governments. They are also predicting the disappearance of 50,000 jobs and a financial loss of €4.5bn. The other party says that this is peanuts compared to the €153bn that bees generate by pollinating other crops for free.

Syngenta openly casts doubt on the value of the EFSA report because it does not include details on the use of processed seed. Bayer refers to the imminent ban as “a disproportionate measure which jeopardises the competitiveness of the European agricultural sector”. The Belgian-Luxembourg federation concerned with the sector, Fytopharma, has referred to the proposal as a “fake solution” for the bee problem.

However, Bart Staes admits that the level of opposition is increasing all the time. "There is no consensus among the member states. Spain and Great Britain are dragging their feet and Germany is also causing problems. It would only take a couple more countries to do the same for the proposal to be blocked by a minority in the Council of Ministers."

A spokesperson for Sabine Laruelle, the Minister for SMEs, the Self-Employed, Agriculture and Scientific Policy, was keen to point out that the Belgian government has responded fairly positively to the European proposal.

However, for the Flemish nature organisation Natuurpunt the European proposal does not, by any means, go far enough. “A general ban must be implemented”, explains bee expert Jens D'Haeseleer and agriculture specialist Annelore Nys. “The pesticides in question are extremely toxic - in excess of 7,000 times more poisonous than DDT. They are ending up in the soil and in the water, where they only break down extremely slowly”. The counter-argument is that the substances are heavily diluted and that the bees are only exposed to low dosages. “However, lengthy exposure to small quantities can still weaken them and make them more susceptible to disease. It is similar to AIDS,” D'Haeseleer claims.

Professor Dirk de Graaf, a bee specialist at Ghent University, continues to be sceptical. Based on research carried out by the universities of Wageningen and Gent, De Graaf concludes that, although bees do die as a result of neonicotinoids in a lab environment, this is much less so in the wild. In his opinion, the varroa mite is the greatest bee killer. He refers to Australia where neonicotinoids are used in agriculture and where no varroa mite is present. There the mortality rates are much lower. "Insecticide is one element of the equation, but not the only one,” he explains, adding that, “a ban will have some effect, but it will not solve the problem”.

For many people the fate of honeybees is an emotive issue. A petition on the Avaaz site attracted 2.5 million signatures within a 36-hour period. Then there is the Flemish première of the documentary entitled More Than Honey on 20 March. If this film catches on, the buzzing is unlikely to die down any time soon.