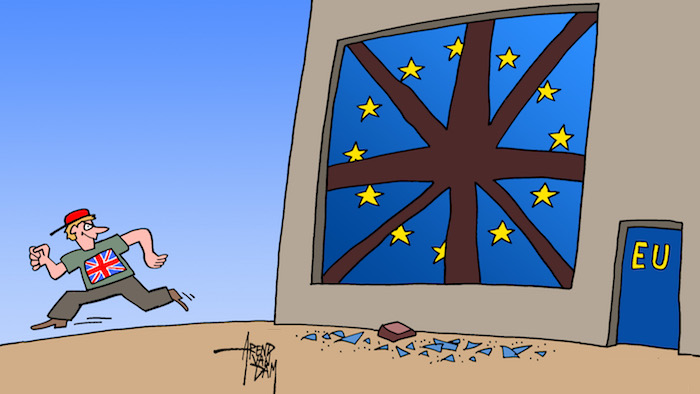 What would be the economic and political consequences of a Leave vote? With two days to go before the referendum that could spell the end of the UK’s EU membership, the analyst Christian Chavagneux traces out the possible outcomes.

“In June 1944, Winston Churchill declared to General de Gaulle: ‘If Britain must choose between Europe and the open sea, she must always choose the open sea’”, Christian Chavagneux reminds us on Alteréco Plus. It is a choice, he observes, that Britons may well make on 23 June. “Should that happen,” he adds, there will be neither the nirvana promised by proponents of Leave, nor the armageddon feared by the Remain camp.

But it is certain that —

a vote in favour of the UK’s exit from the EU would immediately create a period of financial, political and commercial uncertainty for the British economy regarding its future relationship with Europe.

First, “the pound sterling would be pummeled on the foreign exchange markets and would see a significant depreciation.” Against this threat, “the Bank of England and the European Central Bank have already announced they would supply British banks with all the money they require until the storm calms,” in order to keep operating.

From a political perspective, we would be faced with “turmoil whose outcome would be hard to predict,” since it is by no means certain Prime Minister David Cameron will still be in a position to activate article 50 of the EU treaty dealing with “the departure of a member state”. Meanwhile, Brexit supporters

have declared they immediately want to pass laws restricting free movement of people and the power of the European Court of Justice, while starting negotiations on the future of commercial and investment relations with the EU before beginning the process of leaving – a move other European countries have rejected.

And even if these aspects were resolved, “many possibilities open up for future relations with Europe: the UK could become part of the European Economic Area,” which would not bring about widespread change:

there would still be free movement of goods, services and capital; and financial institutions based in London would continue to benefit from the ‘European passport’ – the possibility of selling their financial products across the entire zone, with only slightly higher customs taxes.

If the UK wanted to continue to take part in European programmes like Erasmus (student exchange), Galileo (a European GPS) etc, “it would have to contribute to the budget” like Norway does, Chavagneux observes. This would drastically limit the expected drop in the UK’s current budget contribution. Other models are possible, from a collection of bilateral agreements (as in Switzerland), to a customs union (as in Turkey), to the application of the WTO rules. In this last option “business with Europe would be much less easy, which would translate into companies leaving the UK and lower investment.” Only the City would escape relatively unscathed, because it boasts —

Again at the political level, “Brexit would give power to the most extreme and racist part of the political class. There is no doubt that its counterparts in other European countries would come out stronger in the short term,” Chavagneux warns. In addition, “if a referendum was held in other countries, the result could be negative.” Chavagneux surmises that —

Europe today is a zone extolling permanent austerity, it follows the orders of private sector lobbyists, it is a digital wasteland, an area that is not taking seriously its ecological transition. It welcomes tax havens, is a minnow on the world stage, is largely technocratic, and has been transforming the Mediterranean into a mass grave.

Finally, he observes, “Brexit would be the reveal the ugly truth that Europe is dying at the hands of its leaders.” They —

have run out of ideas to create an attractive, dynamic and energetic Europe. But they seem surprised to find themselves confronted with the rise of populism and nationalism. They are themselves responsible for it, and even a Brexit doesn’t seem likely to shock them out of their stupor. If it happens, many have said France and Germany will announce a closer collaboration in defence and security. But that is not enough to define a project. We are the lost European generation.