Ideas US Withdrawal from the Paris Agreement 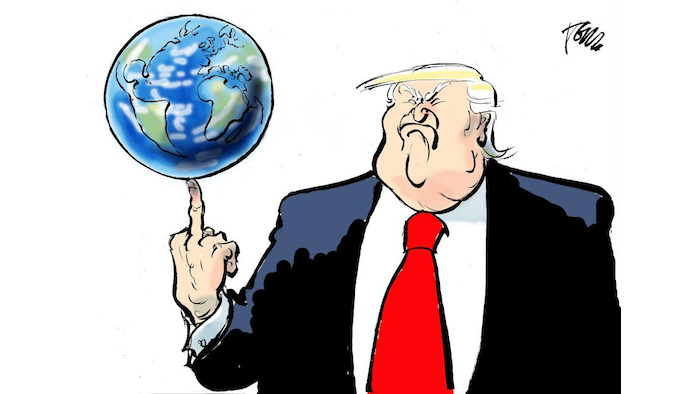 Ideas US Withdrawal from the Paris Agreement

Europe can take the lead in defending the planet

Donald Trump’s announcement to withdraw from the Paris Agreement on climate change, in which 195 countries committed to limit their CO2 emissions, is an environmental catastrophe, but also an opportunity for the EU to take on a leadership role alongside China in the fight against global warming.

Everything could now change. Trump’s marching orders on the climate accords reshuffle the cards of the great multilateral game. While it is an unhappy event for Europe, it may nevertheless open the door to a possible strengthening of its aspirations as a global leader.

For as long as they demonstrate that they have the necessary means, the EU’s Twenty-Eight member states (for now) can become the ‘number one’ in the battle to save the planet, as they have in the protection of fair and free trade. Besides, if the US intends to quit and subsequently re-enter international treaties, as the White House has announced, it will be up to the EU’s Member States to lead the far from simple task of bringing it back into the fold rather than excluding it.

It is a responsibility that opens up opportunities. Washington’s ‘no’ to the Paris Agreement was expected by Brussels and Berlin, who have been deepening their ties with the Chinese, the self-proclaimed guardians of globalisation and the planet, which they have made their ‘stars and stripes’. What is happening in Beijing marks an incredible twist. Beautiful but dangerous.

Europe has the means to lead by example and dictate the rules on climate action, while waiting for The Donald to reconsider. The game has brought all the big players on board: from Frau Merkel to her young French understudy Emmanuel Macron. Avoiding overheating the earth is a twofold strategy: it is both the right thing to do and it generates consensus. It also fuels hopes of influencing China, “the largest environmental sinner in the world”, according to Jean-Claude Juncker, president of the European Commission. And it is also has dual outcomes. Because Europe can persuade Asian countries to pollute less and, by doing so, it can consolidate commercial ties that might generate billions to those who get it right (with Germany leading the way).

Those surrounding Xi Jinping judge it to be a golden opportunity. They can leave to one side the toxic G2 with the US and renew ties to their preferred market – ours. That will be easy if Trump really does push on down the path of bilateralism and protectionism. The Chinese – who are are still difficult to trust wholeheartedly and with whom one must nevertheless contend – have every interest in showing themselves to be reasonable. Selling manufactured goods in Europe is well worth committing to the planet and to free trade. “Expanding the partnership with China in these uncertain times,” Angela Merkel said yesterday. So the true leader of Europe, who challenged Trump before and after the G7 summit in Taormina, points to the path of shared partnership. You can bet other Member States will follow.
[…]

At this stage there is no alternative to a new kind of dialogue with Xi that will do everything possible to fill the void left by Trump’s America. One must, however, be clear that agreements are upheld and transparently respected. We have to make sure that Europe is united in its actions and that the leadership of Angela Merkel does not become a national affair. An Italy that is well integrated into the EU would have the best chance of making its voice heard: it is from there that it should start, better yet if it has a broad and wide-ranging strategy. That counts as much for the upcoming election and for how to administer our democracy, as for the poisoned planet that turn and lives independently of our electoral system.