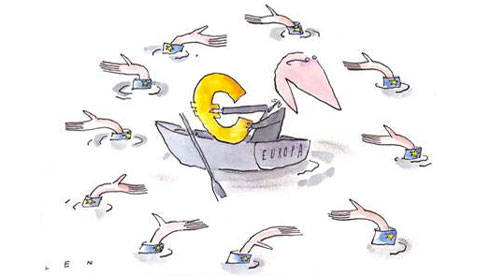 Europe has lost its citizens

The latest Eurobarometer figures are showing clearly what the election results have been hinting at one by one: hit by the crisis, Europeans have lost their confidence in the EU. After having saved the euro, we must rescue the legitimacy of the EU – and before the 2014 elections.

To be saved, the euro needed two things: an unambiguous political decision that would put an end to speculation about its future and a financial instrument that would make that promise credible.

In 2012, after several years of hesitation, blunders and errors, the European leaders have done both those things. The euro has been plucked back from the edge of the cliff and set down on a stable path that had been unknown in recent years.

The very limited outwards ripple of the post-election chaos in Italy speaks of the strength the euro has gained, at least temporarily. Looking back, the shock brought about in October 2011 by the decision of George Papandreou to call a referendum to validate or reject the adjustment policies dictated by the Troika sent some of the indices of uncertainty managed by financial analysts rocketing to levels higher than those that followed the September 11 attacks in the United States. Italy is, no doubt, in a mess. The euro, though, is holding fast, at least for now.

While showing the strength of the euro, the results in Italy, however, also point to the political weakness of Europe and signal a crisis of legitimacy that is becoming ever more obvious, and ever more dangerous, from election to election. The data of the Eurobarometer opinion poll, which the European Commission carries out twice a year, clearly shows just how far the crisis has battered the confidence of the citizens in the European Union.

In countries like Spain, the “net” confidence in the EU (a measure that subtracts the percentage of doubters from the percentage of the faithful) was, in 2007, before the crisis began, at 42 points (65 per cent of those who had trust minus the 23 per cent who did not). Today, however, that has been turned upside down into a net mistrust of 52 points (72 per cent express mistrust, while just 20 per cent still have faith). It's been a spectacular crash and burn.

This run from 42 points ahead to 52 points behind should make us reflect deeply, especially in such a traditionally pro-European country like Spain. In Greece, Ireland, Portugal, Ireland, and Cyprus, the EU is viewed with a distrust as overwhelming as we see in Spain. Significantly, however, the leap of distrust in the EU is taking place not only in the debtor countries, but in the creditor countries, or those financially better off: the people of Germany, Austria, France, the Netherlands and Finland have also lost their trust in the EU. Clearly, the distrust is not just directed at the EU, but at other countries of the EU and their citizens. As things stand, everyone is coming out a loser, it seems.

What is facing us, therefore, is a grave problem of legitimacy. In Europe, where a collective identity, shared values and democratic procedures are still very much in their infancy, legitimacy has come mostly from economic performance: higher economic growth leads to greater public support for European integration, and vice versa. That means that the reserve of legitimacy, in being almost exclusively associated with economic growth, is weak and tends to drain away quickly in a crisis.

That is what we are living through now. On one hand, although the austerity policies may be succeeding in controlling deficits (though not in reducing debt), they are producing neither jobs nor growth, and so are failing to generate the support from the public that they need to sustain themselves. What's worse, forcing governments to systematically violate their election promises and to push through the same policies regardless of their political colouration also undermines the legitimacy of the national political institutions. As witnessed in the countries that saw intervention, political systems are wearing out (as in Spain and Portugal) or breaking down (as in Greece and Italy). Meanwhile, on the other hand, the dominant mood in the creditor countries, where there is no economic growth either, is that the countries of the south are a heavy burden, eating up scarce resources and dragging down their own progress.

It is with this interwoven disaffection and distrust, so sharply deteriorated, that the EU must complete an indispensable political and economic integration. The euro has been saved, but it will not survive over the long term without a banking union that includes crisis resolution mechanisms and pan-European deposit insurance. Nor will it survive without a budget worthy of the name, pooling of debt and a much more effective coordination of economic policies.

But those decisions require exactly what Europe is lacking today: confidence in the EU and mutual trust. To make Europe work, its citizens, from north and south, from creditor countries and debtor states, from the centre and from the periphery, must be willing to provide the European institutions with adequate financial instruments and, at the same time, with government agencies that are both effective and have democratic legitimacy. But for the taxes of a German to support the savings of a Spaniard and for the taxes of a Spanish saver to back up the savings of a Greek or Portuguese person, we need a confidence in Europe that we are currently lacking.

In June 2014, in just over a year, Europe's citizens will be called to the polls. If the citizens' confidence in the EU is not restored by then, we may be in for a rather unpleasant surprise. Saving the euro was essential; but the euro is a means, not an end. The end is the citizens: a euro without them does not make much sense.