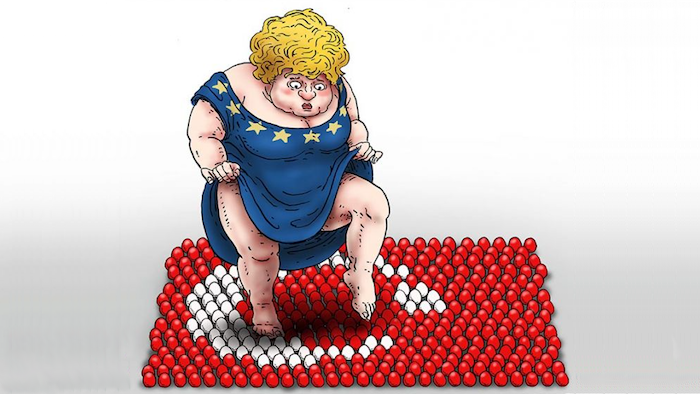 Europe is paralysed by fear

Instead of selling its soul in a deal with Turkey that stops migrants from entering Europe, the EU would do better to help member states who virtually have to deal with the wave of refugees alone.

“I want a reference to press freedoms, otherwise I will not sign.” Italian Prime minister Matteo Renzi was right to point the spotlight on freedom of expression in Turkey before signing an agreement on refugees with Turkish President Recep Tayyip Erdoğan. It is a shame that, under the pressure of Europe’s surging populist and xenophobic parties, his appeal to the EU’s fundamental values will be swiftly forgotten by national governments, who are seeking an agreement with Ankara at any price. It will remain a token, although worthy gesture. Because instead of taking seriously their responsibilities to accept people fleeing conflict and war, Europe’s heads of state and government are preparing to outsource the problem to Turkey, a country where civil liberties, opposition movements and minorities are increasingly under threat.

From the perspective of European countries, this is not true Realpolitik but rather a genuine political and moral failure. Realpolitik would mean acknowledging that, while the arrival of one or two million people is undoubtedly difficult to manage, in a continent with more than 500 million people, we ought to be able to find room for what represents 0.2-0.4% of the total population. As Angela Merkel, the German Chancellor, said a few months ago before being forced to change her position by domestic and international pressure and the absence of European solidarity, “Wir Schaffen das” (we can handle it).

We cannot simply repeat the old arguments that immigration is a positive thing for an ageing continent with shrinking population or that every study shows migrants contribute more in the medium term to domestic economies than they take. We have to face up to the reality of what the facts and figures say. Even worse, European governments – and not “Europe”, as we repeat ad nauseam – believe they can save their skins by relying on a country with a GDP of less than 5% of the EU’s.

In exchange for Erdoğan’s goodwill in keeping the refugees, European countries are willing to give him virtually everything he asks for: subsidies (at least €3 billion a year), visa-free travel for Turkish citizens, restarting EU membership talks and an implicit promise to divert their attention from Turkish persecution of the Kurdish minority and violations of fundamental freedoms.

This deal is absurd for at least three reasons.

The first is probably the most serious. It has sapped away at the very foundations of the European community, founded on the memory of Europe’s own totalitarian regimes. For the first time since its birth, the EU is preparing to deport migrants from Greece to Turkey, including those who have succeeded in obtaining refugee status.

Secondly, the deal is based on the idea that Europe needs Turkey, when it is precisely the other way round. Turkey is having to deal with a war in Syria raging just over the border, the threats of attacks within its territory, and tensions with Russia. Now is the time for the EU to pressure Erdoğan into respecting democratic rights within his country.

Thirdly because European governments hope this agreement will calm national public opinion and deal with xenophobic and populist forces. But this approach fails to recognise that the problem is much more serious. Suffice to say, nationalist movements are on the rise across Europe, even in countries broadly unaffected by the migrant crisis. In Poland, for example, migrants only make up 1% of the population. In Slovakia, the recent legislative elections were laden with racist and anti-refugee remarks; in 2015, Bratislava only accepted eight asylum requests.

In reality, Europe’s troubles stems from the crisis of confidence towards politics. Citizens do not believe their leaders are able to handle globalisation or the technological revolution, which have transformed the social and professional landscape. Nor do they seem competent at managing a changing global balance of power, concretely demonstrated on a daily basis by migratory movements. This is what is generating such anxiety and feeding extremist movements. It is why coming to Turkey for help in resolving the migrant crisis is so non-sensical: it simply adds to Europe’s lack of confidence in its own ability to respond to challenges (especially if Erdoğan does not respect his promise to not let migrants through). Ultimately it will only fuel European citizens’ doubts.

In a world where the European elite were still able to do proper politics, instead of bowing before Ankara, national governments would have to massively increase their contributions to the EU as a way of relieving the frontier nations (starting with Greece and Italy) of their role as controllers and hosts of arriving migrants. They would also have to finance regions that accept (with a significant economic return) settling refugees. At its heart, this is what all countries would normally do.